Do you remember your first tama?

OldSchoolVPQ said:
I lost my first virtual pet, a Nano Kitty, in the chest pocket of my overalls...and found it several months later drowned after a few trips in the washing machine

I also had a Nano Kitty. It met the same fate as the Camo Tama, meaning I have no idea what happened to it.

LucidLyes said:
It seems we all go through the same events with our tamas! I also did lose my tama in the sand at the beach and found it by pure luck a few minutes later.
Click to expand...

We sure are lucky we found ours! Like I mentioned before, my v2 really was in the snow for literal hours, until my mother came to rescue- she found it beeping right next to her feet! I am very surprised it still works. Thinking about all the tamas people have thrown away, destroyed or lost makes me sad. I wonder how many Tamagotchis people have found while using metal detectors at beaches etc.

divino said:
Thinking about all the tamas people have thrown away, destroyed or lost makes me sad. I wonder how many Tamagotchis people have found while using metal detectors at beaches etc.
Click to expand...

I sometimes wonder this about the ones that were given burials when people couldn't bear to reset them, to be honest...

Then my mind turns to the fact that there'll be harmful materials leaching out of them by now (and there would've been toxicity coming from the batteries long ago, as it is) and doing damage to the environment.

I still have my first one actually!

I think that with the exception of furbies it was one of the toys I was the absolute most excited for. It was 2016, so the tamagotchi friends had just come out and I was in the 5th grade. I remember I would get really excited when the ad for them came on TV.


When I was little I wouldn’t ever really ask for anything for Christmas, because it made me feel super guilty. That year it was the only thing I asked for. In the time leading up to Christmas I would watch unboxing videos on YouTube and did a lot of research on all kinds of different ones.


On Christmas I woke up at like 4AM and was super excited to see that my guardians had gotten me not one, but two of them. I used to carry them around everywhere actually. Most of my teachers remembered having them at the time and sort of just ignored the fact that I had them despite the fact that the school handbook bans them by name.

I’m a senior in highschool now and much to my guardian’s dismay — I still love them. Teacher also still ignore them. As it turns out, they help a lot with my depression, so I’m glad I found em’. 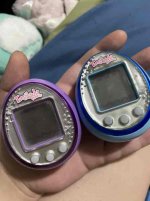 I do. I was the only one in school with a connection, and since none of my friends had one, I got an oldie, which I didn't like. It died one day when I was swamped with homework...I still felt really guilty.

OMG! I remember it, and now I want to find it so bad. So many memories related to it... It's crazy how much time changes things. It all started from that little gadget and now look at me playing video games, that also developed a lot through out the time. I'm a csgo player for years, and now I started to think about the older versions of it, and I would definitely like to play the game without all the newest updates. This game is everything to me. Recently it even became a source of income, since I started to sell my csgo skins and get money out of this.

omg, i still remember it like vividly. i was around 10-11 and my friend brought a gen 1 tama to school with her and i was ENTRANCED. partially bc she was doing that thing little kids do where they wont let you see something they have, but thats besides the point LOL. anyway, she didnt call it a tamagotchi, she called it a virtual pet. and with that knowledge i went with my grandma to the mall that weekend to find some. at one of the kiosks, there was a HUGE display of knock off vpets and i chose this guy:

that exact shell design and everything. when i pointed it out, the guy working the counter said "this one? thats...a cat" and i LOVED CATS LMAO...we got it, brought it home, and holy s**t. what a miserable experience with this thing LOOOL. still tho, i love this thing, despite all the stress it caused. eventually, gen 2 was around the corner and my mom had saw that famous toys r us ad for the gold tamagotchi, and she got it for me after seeing one of her coworkers with one. she thought they were very cute!

i still remember it crazy vividly. i was around 5 years old, and i saw a tamagotchi in a guinness world records book and for whatever reason became instantly obsessed. i begged my parents for the exact tamagotchi i saw in the book, which was a snakeskin v4.5. i ended up getting it for my birthday that year, and i still own and use it to this day. tho, while trying to get the plastic open my dad did cut through the manual so i did have alot of trouble with it as a kid...

i got my first tama as a gift from distant relatives. it was a v3 blue with butterflies, and i had it for maybe two years...? i remember very clearly, whilst i was riding my bike i got a marriage request thing for my warusotchi haha. because i was a dumb kid, i tore the buttons off... and then threw it away after the batteries died...

Dogfish said:
i got my first tama as a gift from distant relatives. it was a v3 blue with butterflies, and i had it for maybe two years...? i remember very clearly, whilst i was riding my bike i got a marriage request thing for my warusotchi haha. because i was a dumb kid, i tore the buttons off... and then threw it away after the batteries died...
Click to expand...

Oh gosh. I met a younger person online recently who said when they were a kid they threw away their Nintendo DS when they got bored of it. I was like "What's wrong with kids these days?!" hahahaha.

I remember the first time I ever saw a virtual pet. It was the summer, and there was a kid at the pool one day who had one. The rest of us kids were all clustered around that kid, watching as he started it up (I don't know if it was for the first time or if he just reset it). It started life as a beating heart, and then eventually turned into a puppy. I thiiiiink it was a Nano puppy, but the one I had later didn't begin its life as a beating heart, so I'm not sure if mine was just a later version or if I was wrong about what type of pet it was.

My first virtual pet was a Gigapet "Digital Doggie." I still have that one since it was my favorite, and now my daughter plays with it

But of course all my friends had all kinds of different virtual pets, and I eventually saw a Tamagotchi (the original) and wanted one. However, when I'd saved up my money and my dad took me to Zany Brainy, they didn't have any originals, all they had was Tamagotchi Angel, so I got that instead. It was the type with the pearly white shell and gold wings. I didn't read the directions very well apparently, so I wasn't really sure what to do with the thing. But I still liked it a lot, even though it died often

Later on we took a long train trip to Colorado, and I'd brought that along and was bored with nothing to do but take care of it, so it became the really good adult (I think?). I was a little weirded out by the fact it had two heads

I also remember on that tamagotchi that if you didn't clean up its poop, eventually it would turn into a giant poop... and then was dead apparently? I couldn't seem to do anything with it other than resetting it, but it didn't seem dead. I miss that tamagotchi, mostly because it was so strange

My first Tamagotchi was a V3 hand-me-down from my older two siblings, which I then gave to my younger sister. I now have it in my possession, and it's miraculously in nearly perfect condition after all of us. My siblings all lost interest in Tamagotchis after some years, but I didn't. Now, 15 years after my first Tamagotchi, I still buy new ones and keep them running. I think my collection is near 50+ now? I don't even know.

The first Tamagotchi I ever had was a P2 with a translucent yellow shell and black buttons. My very first v-pet in general was a koala Giga Pet. I remember I wanted the T.Rex Giga Pet so bad but could never find it in stores.

Flower_Mom said:
The first Tamagotchi I ever had was a P2 with a translucent yellow shell and black buttons. My very first v-pet in general was a koala Giga Pet. I remember I wanted the T.Rex Giga Pet so bad but could never find it in stores.
Click to expand...

My very first tamagotchi was the black with grey/white camo, which I got for Christmas that year - I distinctly remember my mother telling me that was the last one they had left in stock, too xD
According to a vpet-related book I have, I named it Sprite
It's been very well-loved, but still works perfectly!

P
Old Tama owner but its been a while