My V5 was one of my Tamagotchis from my childhood and one which I delayed the most in starting up – ironically not because I knew its programming. I soon found the restriction to using one tamagotchi for games and animations isolating, and that is likely why the birth of my Sunnytchi felt so perfect. It was luck that I had read before about the space family to not assume it was a malfunction, just as it was luck when a portly Planetchi appeared offering a radiant Sunnytchi as a bride. Soon a single egg lay vibrating on the screen and a strange Tamagotchi was born, one that could leap into the sky as if defying gravity. I was glad for the change and that for once I had a single tamagotchi to raise, an all-inclusive one.

Each new form was pleasing and when she eventually evolved into Sunnytchi, I couldn’t help being taken with her pure happiness. I often thought of her as my happy sun child because she always smiled and seemed so joyful when she leapt into the air, regularly defying gravity.

She had the charm of Tamatchis and Ginjirotchis, thankfully without the eeriness of Smiling Angels (pure nightmare fuel... pure nightmare fuel...). She was also quiet pudgy, evident when her short, stubby legs poked out when she sat down. I knew I would keep her for a looong time because I was content, and she was content as she showed in every moment. At one time I thought “Why not keep her for a year?” and so it was decided. But finding her birth date proved rather difficult. I had hatched all my Tamagotchis casually so I didn’t have any records – in fact I never started personally logging anyone till I got my first vintages, which must have been a few months after my renewed interest in Tamagotchis. The only marker I had was my father’s birthday where I remembered right after Church we headed out to a buffet and my sunny child was paused and stowed in the trunk. I reasoned that must have been her first church service and perhaps she was hatched a week before. Nevertheless, I chose that day to mark her start and when we came to that day again, I would wed her to another tamagotchi.

She was the 6th generation of the Jafbo family – a name I had chosen believing this would be the name of the tamagotchi and not anything of permanence. The parents of the Jafbo family were a slender Memepapatchi and round Planetchi, an odd-couple that I found nearly as endearing as their daughter (especially when they gave each other pecks on the cheek during idle animations). Sunnytchi experienced allot, from the usual mundane days watching me study, to accompanying me on occasional walks, to weekly Church services, and to the special adventures. She amassed quite a fortune which was barely spent on those pricey goods on the tv shop, as I found the codes to get stuff for free. Whether she thought that was cheating or not I can never tell; she enjoyed them all the same. She got to play with much – from painting pictures to shooting hoops in basketball – and eat a vast variety – from whole crabs to steak dinners. Actually, maybe all that food, originally designed for a whole family, is the reason she was so chubby.

She had her tv watching sessions where she would stop on the correct channel to raise her happiness. She also saw me get much better at those games with all the practice we went through. Eventually after I go over my scare of her turning into a different Tamagotchi by overfeeding – made easy as the V5 has no weight meter – she was given an occasional snack and frequent trips to her toy box. I hadn’t raised her militantly so she was probably of average maintenance and not quite as worry-free as she could have been. There were times she would startle me by throwing a fit in the middle of her screen over an empty meter. I would quickly attend to her and feel apologetic. She got more care mistakes than I ever intended, once turning into a ninja and peering at me from the ceiling. The first time she changed I was surprised and appreciative of the variety, but quickly decided she must be changed back. I could change her back but not her parents and thus she remained the daughter of two ninjas. 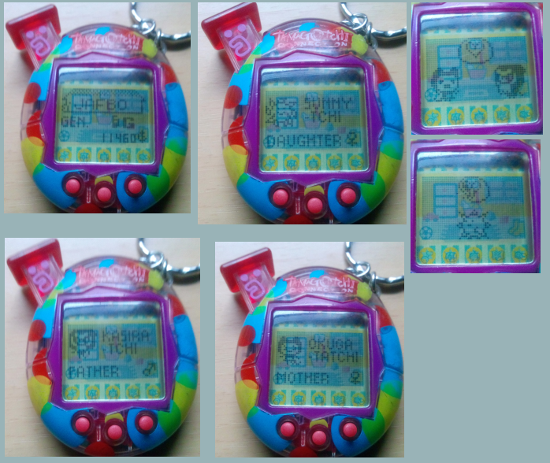 That wasn’t the last time she was a ninja. One bewildering day in December, I forgot to take my tamas to church, an on a Potluck Sunday no less. I convinced my family to rush home and when I got there I found my tamas alive and well, Sunnytchi that cat-eared ninja once again. I did top her up and change her back, but at the time I was more worried about my deliberate long-lived oldie.

I have to confess that although I loved my Sunnytchi, with all that time she did become part of the furniture. Yet, I was never driven to marrying her off early. I wished I could give her more variety from all the listings I had to page through in finding her something she had already used so many times. I did ritually give her an omelette every day as her first meal, which conveniently fit with the occasion and restored three hungry hearts. As for her toys, eventually we dived in to using her souvenirs, relics that made her overjoyed and repeat the same an animation regardless of the object. Unfortunately for the V5, certain items and games will not fill up happy hearts thus meaning they are unnecessary to use. Certain new things she saw rarely simply because they didn’t make her happy, they improved her bonding instead (which, mind you, was kept at around 90%).

Eventually the fateful day was upon us and in the morning I married her off on her one year anniversary, not quite her birthday but it made up for all the times she was left on pause.

She’s not quite gone and I’m not quite grieved. We spent a year together and rather than her marriage being our separation, it is merely a fulfilled life. Soon, my dear Planetchi, you will pass off the record when your children marry, but I will not forget you. You were my first oldest and affectionate and dear. Goodbye, my sunny child. 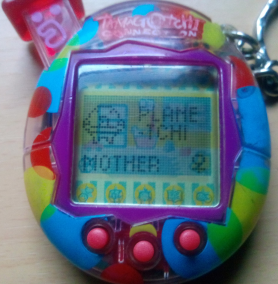 Adventures of a Spacy m!x with CaraPrincess