so, a little backstory: my tama arrived on monday, but it took until today (wednesday) to actually be able to play it. it arrived in it's original packaging and everything (which i preserved and am holding onto), 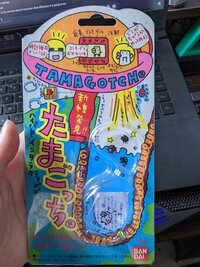 but since it's 25-26 years old, the batteries were long dead. my roommate tried taking the screws out, but they ended up getting stripped.

today, the walmart vision center managed to get one screw out, but not the other one. luckily, a local jewelry store was able to do it! success! apparently the screws in the japanese versions are REALLY drilled in there, so they can be really difficult to get out.

she has a little scarring, but overall she's ok! 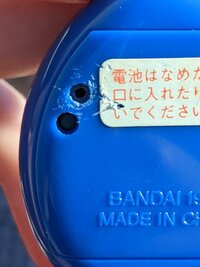 so, that's it right? that's the end of the issues? well... not so much. after i finally managed to get her open, my roommate and i discovered the battery contacts were damaged by the old batteries leaking. luckily, grabbing some alcohol from a neighbor and cleaning the contacts fixed the problem, but before that it would only turn on when the batteries were pressed down REALLY hard.

but, after blood, sweat, and tears, i FINALLY have my tama! 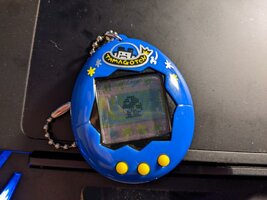 i have decided to name her casey.

since this is the japanese version, here's some translations 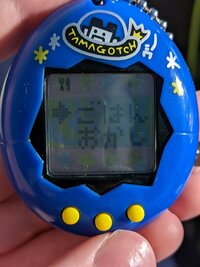 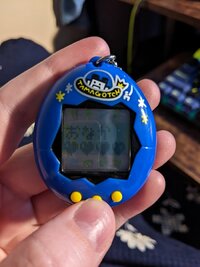 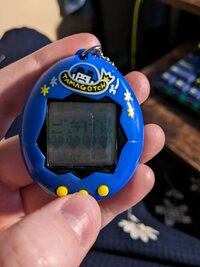 and this says "gokigen" (good mood)

to end this log, my tama has just evolved from a baby into a child. thanks for reading!
Last edited: Jul 21, 2022

Yeah I got an Angel recently and the screws are horribly tight. I managed to get one out but started stripping the other so I stopped messing with it. I never thought of taking it to a jeweler.

GJ on going through all that work to get it working again! I would have quickly given up and just waited til I could afford another one lmao.

Also we have the same shell

haha, thanks for validating my pain wrt the japanese screws. the walmart vision center is a great option as well, i just had to resort to a jeweler because the screw where the cracks are was stripped so badly. i'm really happy they managed to get it out, and they were very kind about it! they actually assumed i was looking for batteries when i pulled it out, haha.

this is my very first tama, and the seller was incredibly nice and added an extra little goodie as well (an r2d2 nano, which is now my roommate's first tama!), and also wished me a happy birthday since i mentioned it's coming up very soon! this was a birthday gift to myself and i'm really happy it works now

and wow, really? is yours english or japanese? when looking through shells, i saw this one and knew it was the one for me. i know there's a plain version, but i think the ufo and little stars are very cute, and i tend to go for blue with yellow (or green) accents when it comes to my electronics, lol

Mine is Japanese as well. It's such a cute shell!

my tama evolved into an adult today! i was aiming to get nyatchi but i ended up getting... 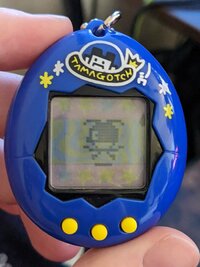 zuccitchi! this was a happy accident, as i don't mind and i can always try for nyatchi next time. also, as soon as i got them they ended up going back to sleep for a few minutes because it was like 10:55am and they wake up at 11am lol

i do want to ask if anyone has any tips on how to get nyatchi(/pochitchi) though? i'm not exactly sure where i messed up. it might be that she needed to evolve from child to teen with 100% discipline instead of 75%? i didn't realize that the discipline level would decrease after she evolved. or maybe i need to make absolutely sure she never goes below 1 heart loss? she went down to 2 heart losses a few times. or maybe i didn't clean up her poo fast enough sometimes? she never had more than one on screen though

The heart loss doesn't matter, all that matters is number of care mistakes (missing a call by 15 minutes) and discipline.

There are two "paths" to Nyatchi, depending on how you raised your child into a teen.

If Tonmarutchi has 75% or 100% discipline when evolving into Tongaritchi, it will become "version 1" Tongaritchi. From this, you want to have exactly 75% discipline to evolve into Nyatchi.

If Tonmarutchi has less than 75% discipline when evolving into Tongaritchi, it will become "version 2" Tongaritchi. From this, you want to have 100% perfect discipline to evolve into Nyatchi.

so, what consitutes a "care mistake"? because, my child involved into a teen with 75% discipline, and then it had 75% discipline again when evolving into an adult. and i don't think i missed any calls (except the ones i intentionally missed because i was trying to keep it at 75%)

my roommate has an english gen 2 she's playing with me and was trying to get mimitchi but got pochitchi instead, and her teen evolved into an adult with 100% discipline?

When they beep for you after running out of hearts, if you don't respond in time that the call light goes out, that's a care mistake. But it shouldn't affect whether it changes to Nyatchi VS Zuccitchi.

Did perhaps your roommate's child evolve into teen with less than 75% discipline...? Or if it's the rerelease, they work differently, and have a separate "discipline mistakes" counter despite the discipline meter.

If you had 75% discipline going from child->teen and 75% from teen->adult it should have been Nyatchi.

I've done quite a bit of testing myself and it always works for me the way it's "intended" but I see you and others sometimes getting different results so I'm wondering if there's some other factor in there I'm missing?? Maybe you need to go from child->teen with 100% discipline?

Try no discipline until teen, then 100% discipline as teen->adult and see how that works maybe?

my roommate got pochitchi by getting 100% discipline from both child -> teen and teen -> adult, so i have no idea haha. we're both on the OG gen 2s as well, not the rereleases (though i just bought a rerelease for her recently since the OG she's using is a hand-me-down and has some screen issues)

i might try no discipline and then 100% discipline next time, like you said. i'll let you know! thanks for all your input, i really appreciate it!

Maybe the P2s function slightly differently from the P1s then? like 90% of my testing was on P1s. I... don't think that's the case, but it could be? EIther way, good luck with the next go :O

I think I've figured it out -- the second wave of Japanese P2s featured updated "v2" programming which includes different methods of obtaining the characters. Didn't realize that until I was looking at information on shells just now. So the proper way to get Nyatchi? It's a mystery. I did get it once before using an appropriate method that works with the old releases, too, so maybe the no discipline - to - 100% discipline route might work, especially if you completely avoid care mistakes.

It also seems to be different from how the rereleases work, so... who knows! Sadly this stuff is not well-documented.

my roommate's p2 is american, not japanese like mine (hence pochitchi) BUT, that's really helpful to know thanks! again, i'll probably try what you suggested and report back. i am a little tempted to reset this one and try again right away, but we'll see (i don't want to kill him prematurely)

Yeah, it's possible the American ones used the v2 programming as well (I can't find any information on that X_x) -- all of my testing was done on Japanese devices except one American P1 so who knows