I'm TamaLove754, or Vis_Mage in most other places nowadays. Not a new member here, actually joined way back in 2008. Was really active back in 2008-2012, back when the forums were bustling with activity. I never exactly left, but over time I sort of started lurking and checking in every so often, occasionally posting and catching up on any new tama news.

Usually, once or twice during the year, I'll get the tama itch again for a little bit, but this time, it's really been sticking with me! Part of which can definitely be attributed to unlike before in high-school/college, I'm now fortunate enough to be able to work from home, and have way more time to devote to the little cuties!

Started up my original V3 that I got ~15 years ago now, and have been getting more and more into it as I've gone. Game development is one of my main hobbies, and the reignited interest has even inspired me to start working on a tamagotchi-like game for mobile! Not really sure why they decided to remove the old mobile tamas for years back, but it's the sort of thing that I'm hoping to achieve.

It's been a while since I've ran most of my collection, but I've really had the itch these last couple weeks. Spent a few hours yesterday giving them a nice cleaning. Seeing the prices now, I'm definitely happy that I was adamant on keeping my collection all these years.

Here's my full collection, mostly gotten in 2008-2012, with a few extras since then. I have one other music star, but couldn't find it at the moment. Mostly connection-era tamas, haven't dabbled too much with the color tamas yet. 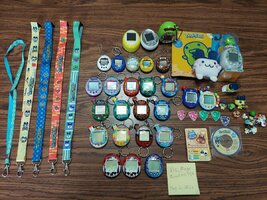 Anyway though, always open to chat. Be it about some of the older tamas, the old days on the forums, or that mobile project of mine, just shoot me a PM.

your collection is SO AWESOME!!! i love all your v5 shells, and the tamatown tama-go in its packaging is really cool too

Fascinating collection you've got! I love the little mimitchi up there

Welcome back. It's nice to see picture of your beautiful collection.

Welcome (back) to the forum!
You have a fantastic collection!

Thank you so much everyone for all the kind words!

I'm really glad that I kept them all over the years, and despite not having had the best storage, they were all in fairly good shape after a little cleaning.

Definitely am going to look for a nice way to store them. I've seen some people showcase their vintage/connection tamas in what I presume are glass jewelry boxes, which look really snazzy. Anyone have suggestions for collection storage/showcasing?

Will probably want to try and remove some of the screen scratches from some of my more heavily used tamas. I've heard Polyeatch does a pretty good job, and doesn't seem to make the screen cloudy. Anyone have experience with this sort of thing, I'm a bit nervous to try in case I end up damaging the screen further.

I don't have any experience with storing tamas or removing scratches from the screens but have been thinking about doing the same thing for my collection, especially my colour devices like my idl that could do with a little TLC!

Hopefully you'll find something that works for you!