In spite of easter, I decided a few days ago to run my Usatama in celebration. I went ahead today and removed the old batteries, and popped in the new. I’d done this numerous times before, so I didn’t think anything of it.

As soon as I put the new ones in, the screen was black. All the pixels were filled in (which gave me hope, as that meant the batteries were making contact) apart from a few ‘scrambled’ ones in the top left corner. I took them out immediately, as I didn’t want to damage in device further and permanently damage the screen. When my Dad got back (the one who helps me with all of my Tama-issues)  he tried himself, with more dead pixels in different patterns. He tried resetting, nothing. There were just random pixels on the screen (image attached for reference to what they roughly looked like at the time) with no response from the reset or ABC buttons.

We tried again, this time the clock displaying and the device beeping. As I finally thought it worked, the ‘12’ which was supposed to be on the left side of the screen was.. missing? I tried to click ABC over and over, but it appeared to be frozen. Took them out again, and put them back in. Not expecting much. There was more garbage on the screen and then.. clicking? It sounded like something was going horribly wrong in the battery compartment. It went on clicking until I demanded my Dad to take out the batteries before it completely short-circuited itself.

Since then, it’s been displaying dead pixels on and off, but most of the time nothing at all. The buttons are unresponsive, along with the speaker and reset.

I also want to mention a few things before I get suggested them, as I have already tried most of the Google results provided!

I’d appreciate it greatly if anyone had any advice or ideas on how to resolve this issue, it would mean a lot to me and my Tama!

Here is what we are getting on the screen right now (With batteries in). When we take them out, simply nothing is displayed. It was showing completely black before, but it looks similar to this;

You can clearly see faint and darker lines scattered across the screen, but before it was similar to garbage sprites and pixels. Hopefully this gives people a better idea of what i’m dealing with! 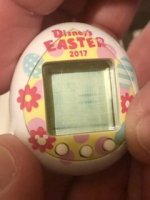 KidRetro64 said:
The brand of batteries is Duracel, which is the same brand I used for the batteries previously, along with all of my other virtual pets. I’ve never had any issues with their batteries until now.
Click to expand...

Just for extra clarity, here: Are the batteries in-date?

Aside from that, how has the device been stored?

I bought them 2 days ago from Sainsbury’s, so I would hope so!


Penguin-keeper said:
Aside from that, how has the device been stored?
Click to expand...

It’s been in a drawer for 6 months without use with all my other Bandai Tamagotchis. I’ve played with them on and off with no trouble.

KidRetro64 said:
I bought them 2 days ago from Sainsbury’s, so I would hope so!
Click to expand...

Hahaha! I would hope so too!

KidRetro64 said:
It’s been in a drawer for 6 months without use with all my other Bandai Tamagotchis. I’ve played with them on and off with no trouble.
Click to expand...

I must admit, given this I'm completely puzzled by what's happening here - you've covered all of the bases, already. I really hope that someone is able to shed light on this one so that we can all improve our knowledge!

Something's wrong with my Tamagotchi P's?!