Disclaimer: All of the following is not information about a new or upcoming product and is just my idea for a new vpet.

Introducing the Tomodatchi! The Tomodatchi (coming from the Japanese word for friend, “tomodachi”) is a simple tama with a simple task: get as many friends as possible! There are two versions: Island and Nature. Depending on the version, there are different shells and a different character to befriend on both; Beatchi and Forestchi respectively. 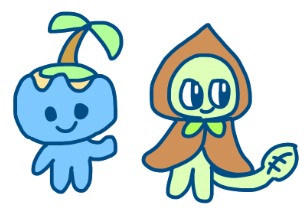 At the start of the game, you are introduced to the main/titular character, Tomodatchi. You can choose if they are a boy or girl, but the only real difference is the color (blue or pink).

As you evolve into the adult stage, you can build relationships with other tamas- bringing their favorite food/item, playing with them, and the like to raise friend status. To move on to the next generation, you must get at least 5 tamas to the “Best Friend” stage. There are four stages: Stranger, Acquaintance, Friend, and Best Friend, similar to the ON/Meets’ friend levels. Once you’ve befriended five tamas, you can marry, and the process starts again. Depending on how well you did, the difficulty of building a friendship changes; the faster you befriended 5 tamas, the harder the next generation will be, and vice versa for the slower.

However, on the next generation, you cannot befriend the same 5 tamas. You “beat” the vpet once you’ve befriended every tamagotchi character- but this is not an easy task, as there are a lot! Once you’ve beaten it, you can choose to start over at a harder difficulty with more characters, letting there be some replayability.

Let’s look at the actual vpet and what you can do... This example is a Strawberry Nature shell, but the functions are the same for both versions. There are 5 buttons and a simple color screen, and the device itself is between the size of a Connection and a Tama-Go. The bottom three are for your usual menu scrolling, selecting, and cancelling, but the arrow buttons are for some of the games and to go to different parts of each world to find more tamas. There are two connection sensors- an IR and a NFC. The IR is for Connection-era models to connect, and the NFC is for other Tomodatchis. There is also a hole for a lanyard or keychain.

The options are similar to a regular vpet: you have status, eating, bathroom, games, connection, exploring the town, items, and a friend list. There is also another icon, a generation viewer, that lets you see what every generation has befriended so you don’t get confused on if you’ve befriended a tama already.

That’s about it for my vpet concept, hope you enjoyed!  :mimitchi:

I really enjoyed reading about your concept, especially the IR and NFC feature!

for some reason it reminded me of Mesutchi &amp; Osutchi