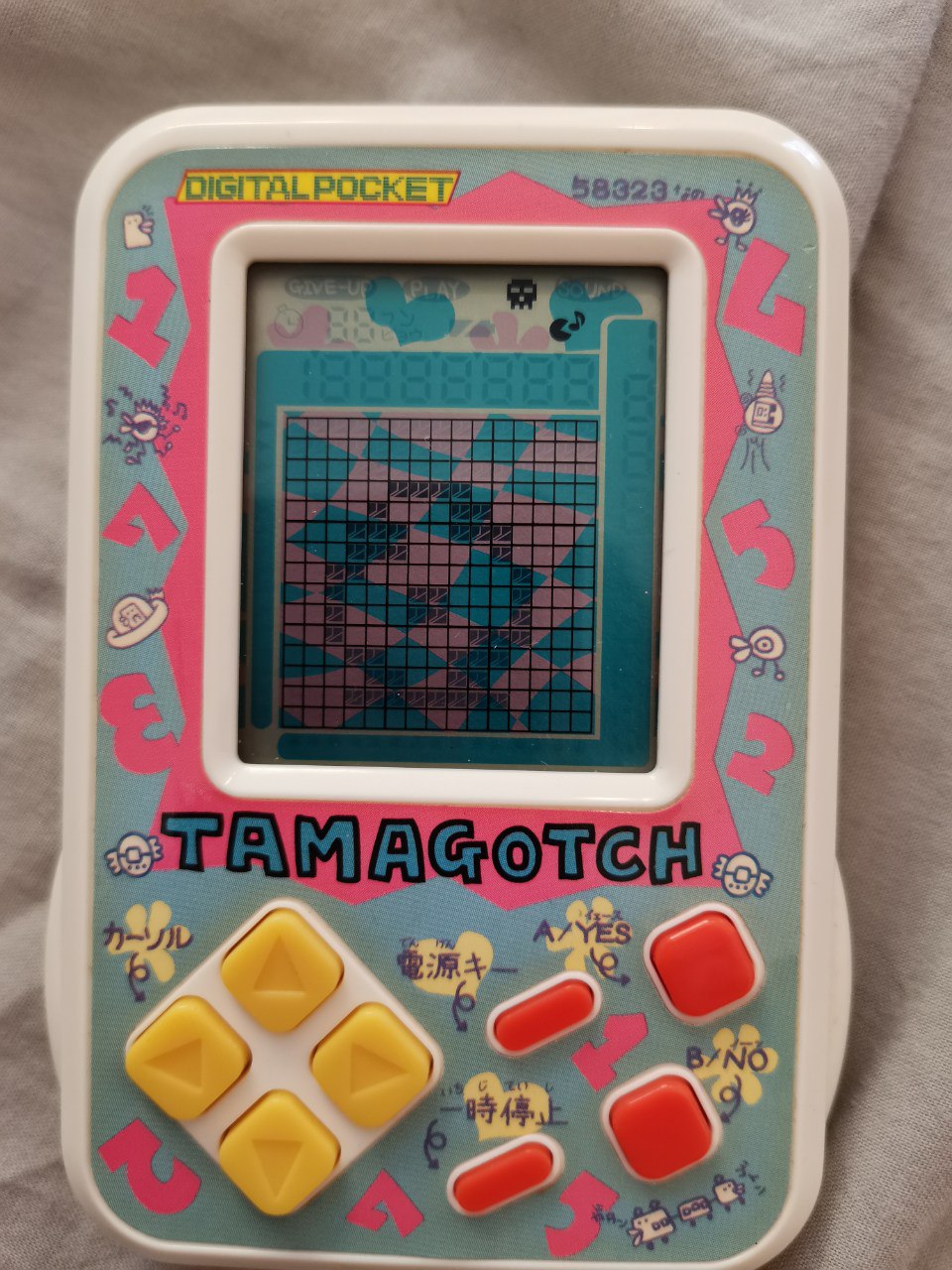 During the peak of Vintage Tamagotchi in Japan - Bandai capitalised on the Virtual Pet toy's popularity by making a variety of spin-off LCD games. This device - the Tamagotchi Digital Pocket, is one of them. I estimate that it was released in 1997/98 as supported by the copyright information on the back of the device - and the fact it contains P2 assets. It's unknown how popular these devices were - however they have become incredibly obscure.

Starting up a game.

On starting up the device - you'll be greeted with an image of the P1 Egg.

Pressing the B button will allow you to change between the default egg (P1), the P2 Black Egg, or Obaketchi - as of this moment in time I believe that these are different puzzle sets a player can pick between. 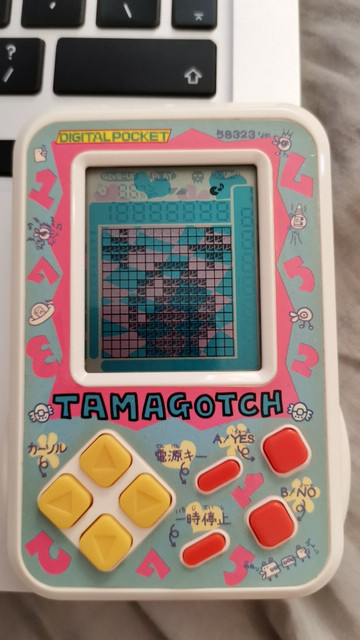 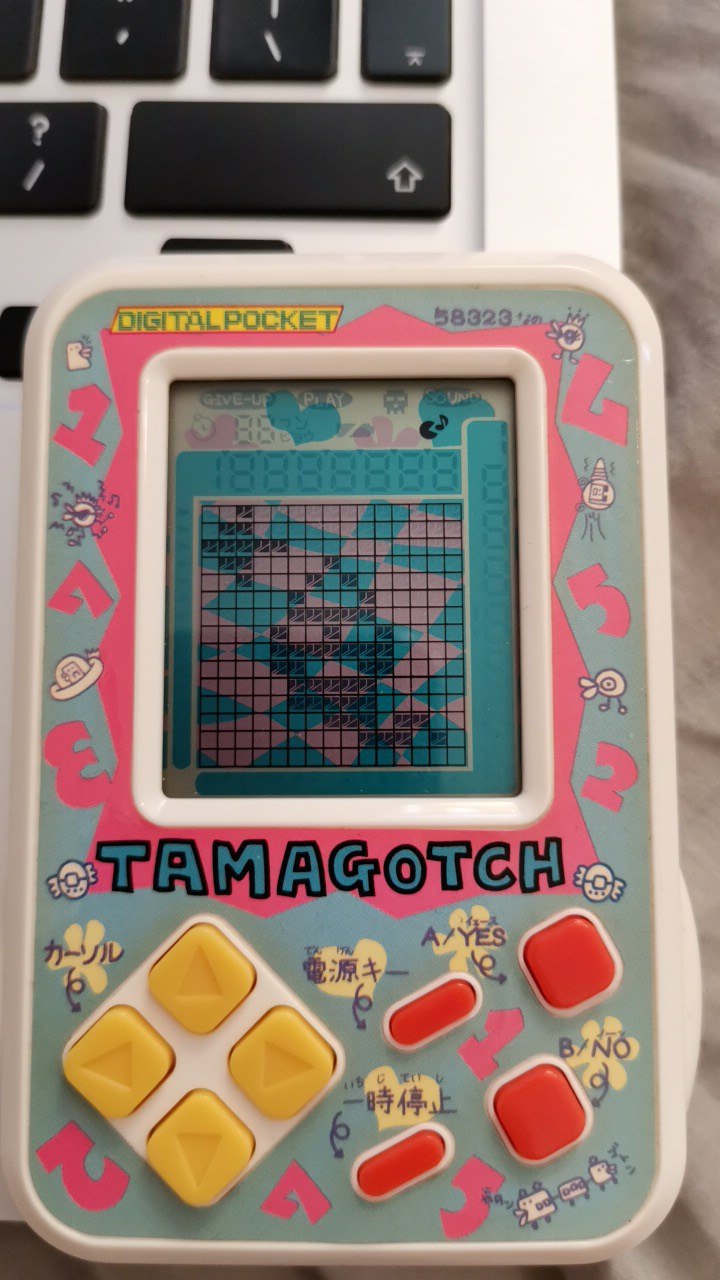 On pressing the A button the User will be able to select between two difficulties - 'Hard' and 'Easy' - the major difference between the two is the playable time limit. Hard mode gives the player 25 minutes to complete a Picross puzzle, where as Easy gives the user 45 minutes. 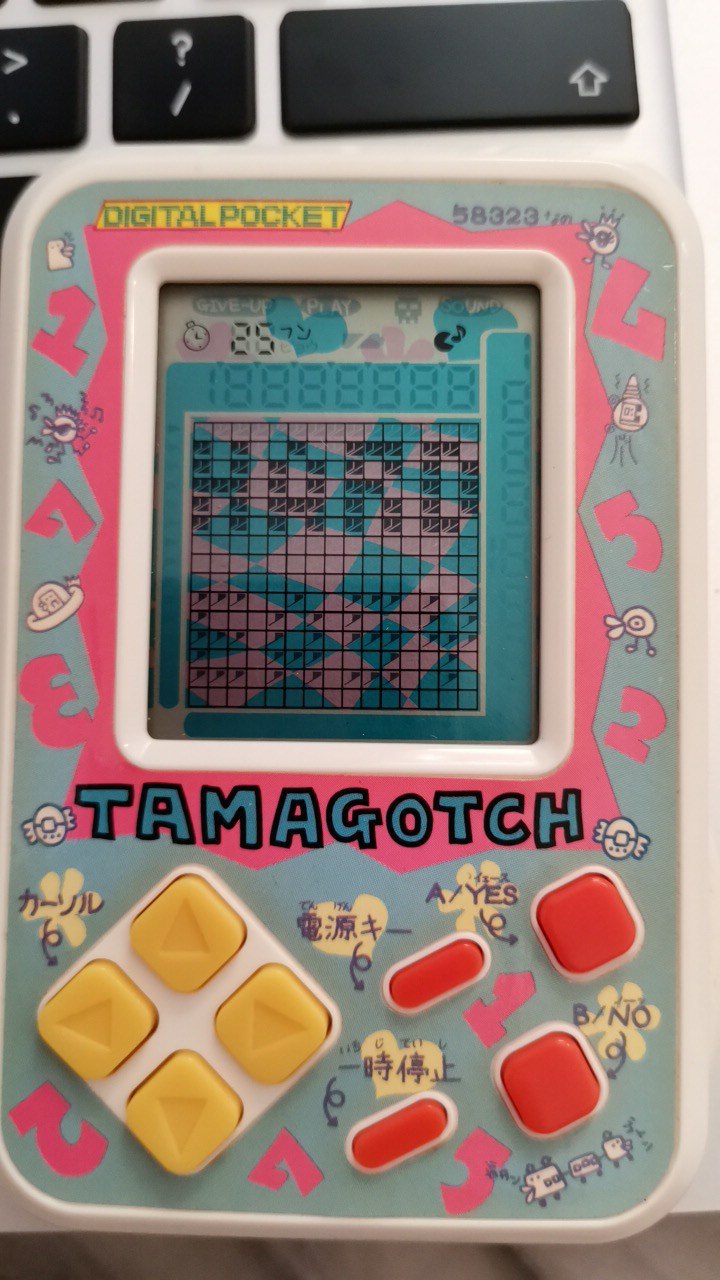 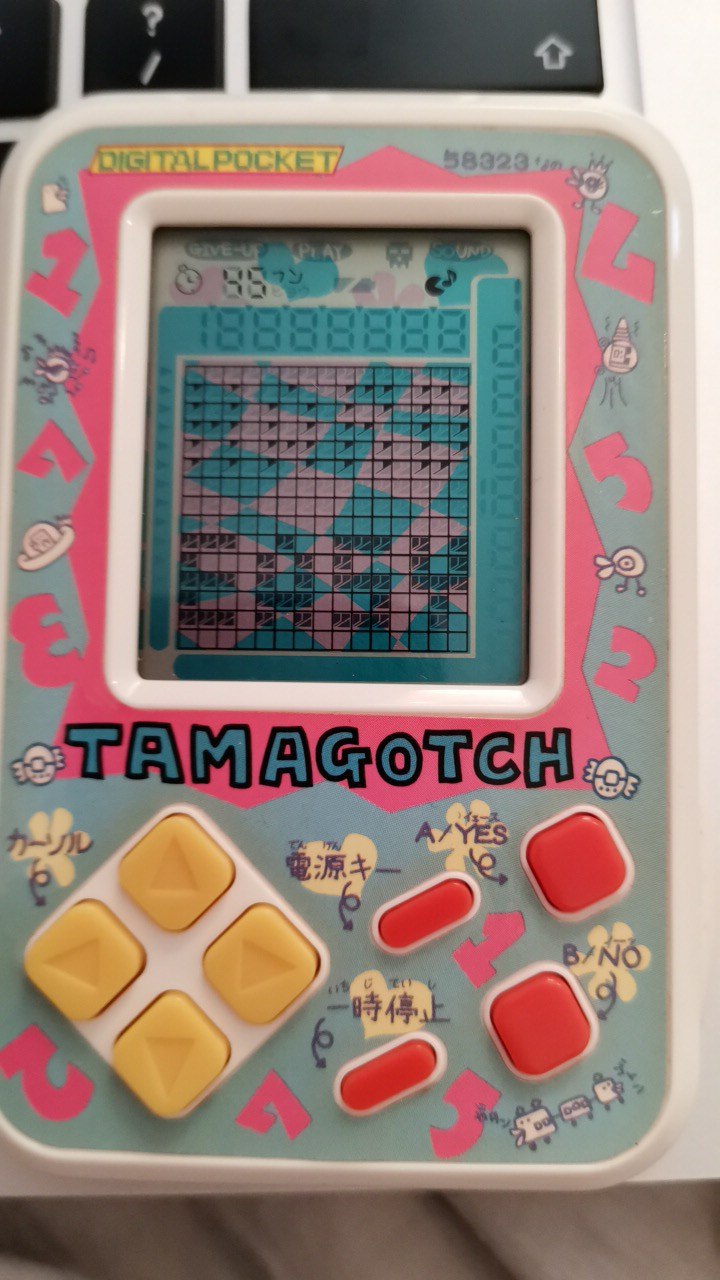 After this the user is given two options - 'Play'; which starts the puzzle without additional hints, leaving the player to solve the puzzle themselves, or 'Hint'; which draws two lines, one vertical, one horizontal to give the user a bit of a head-start. 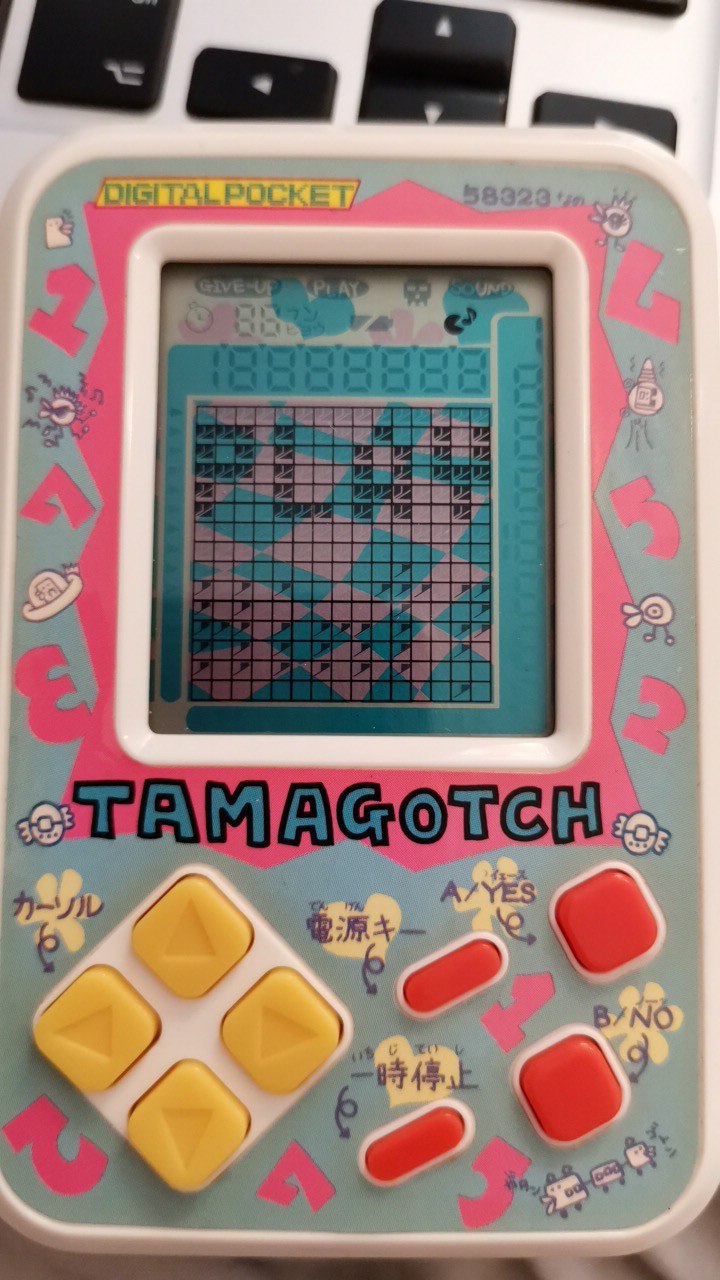 The Gameplay itself is your standard Picross fare. The numbers on the top-row of the display represent how many blocks you have to fill in horizontally, while the numbers on the side represent vertical. The goal is to use these numbers to correctly fill in a sprite. When the player makes a mistake - time is deducted from them. So far from my tests these seem to mostly be Tamagotchi P1 and P2 sprites - I'll be keeping an Imgur album of completed puzzles when they are done. 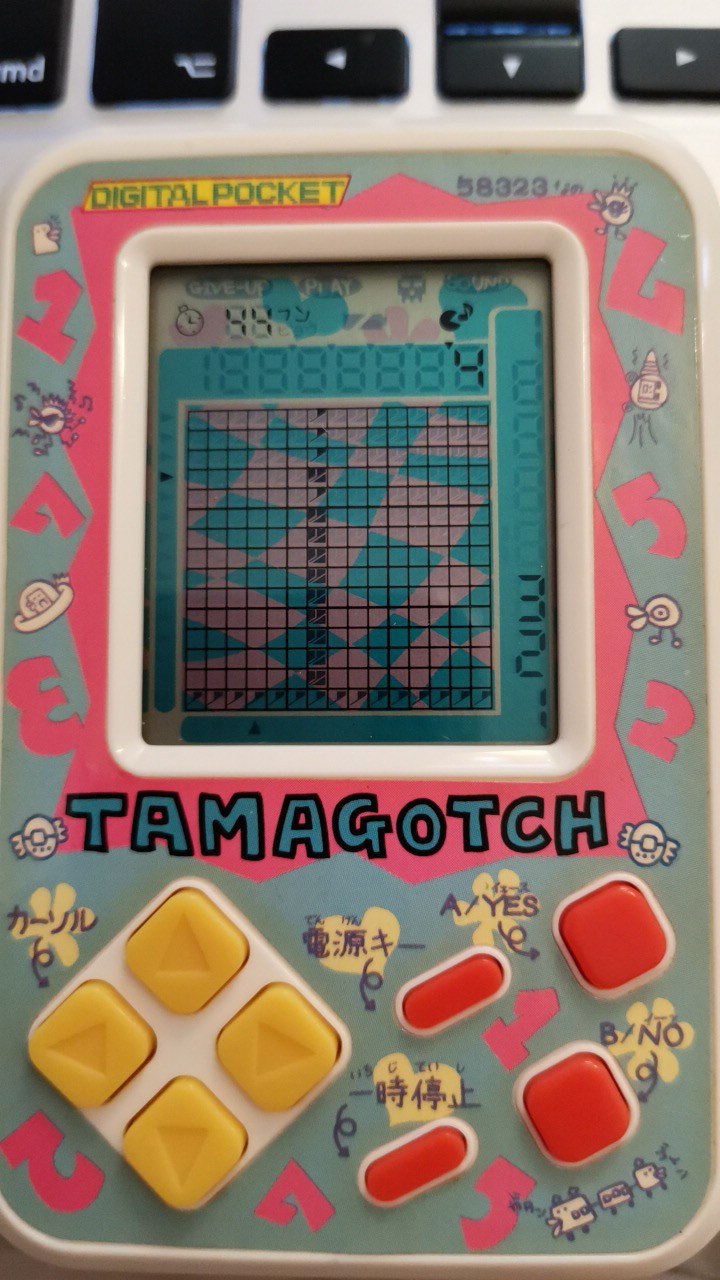 The pause button is the bottom 'option' button - this will take you to a screen with a question-mark. Up and down on the D-Pad will allow you to change the device's contrast - left and right will allow you to select between 'Play', 'Sound' and 'Give-up' and selected with the A button. 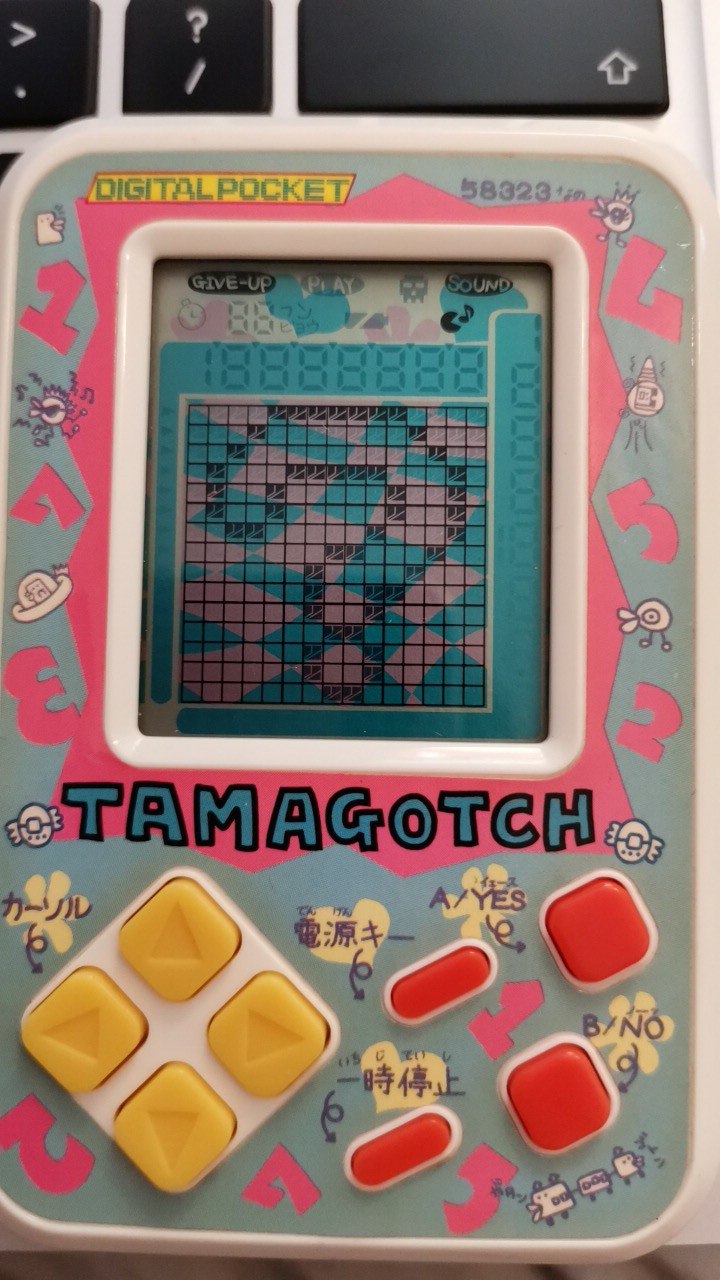 The device will play an animation from the item you have completed - in the case of an Egg, it will play a breaking animation. After this you will unlock new puzzles to complete, confirming my suspicion that the different eggs were in fact different puzzle sets. 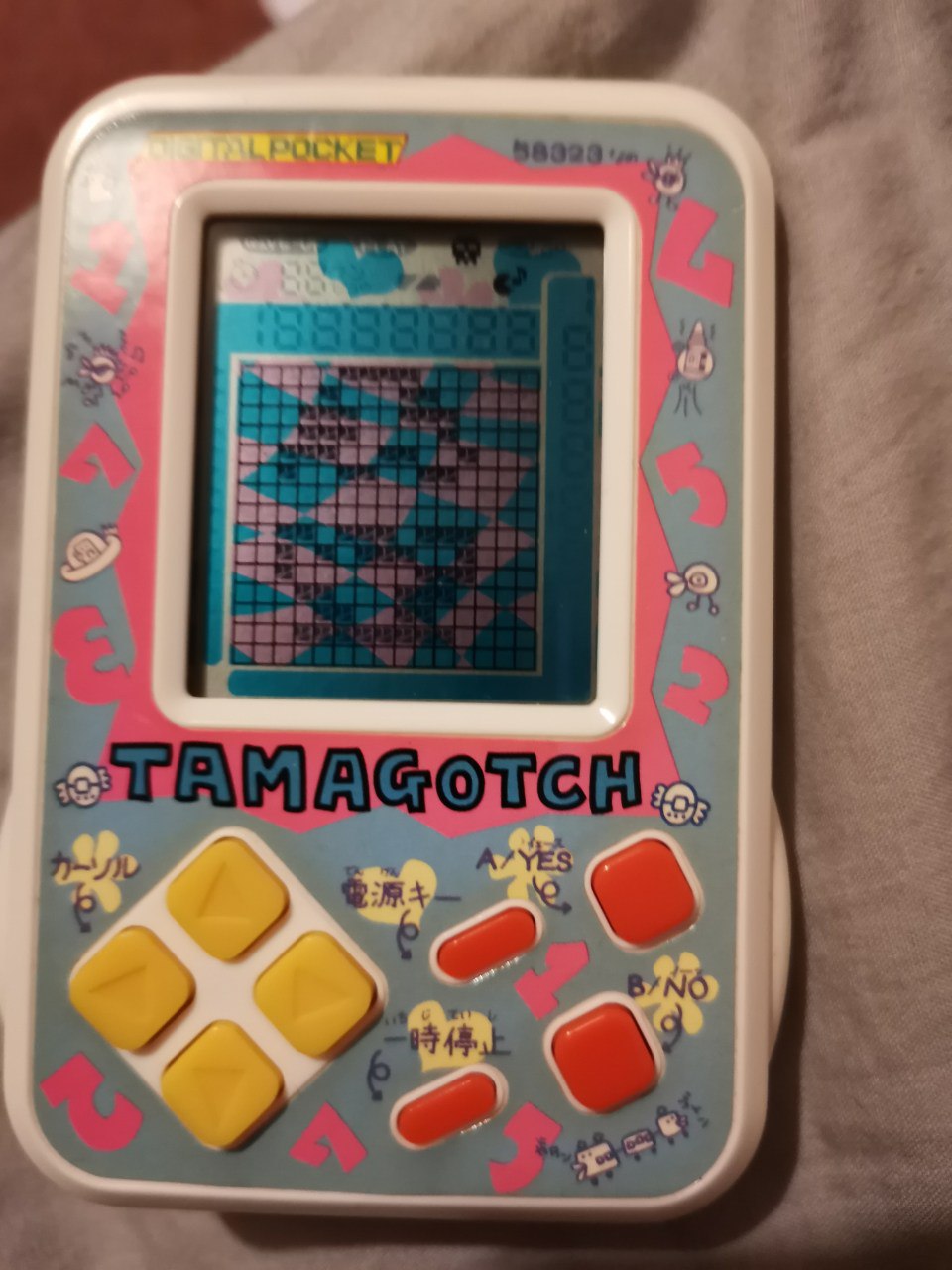 To avoid spoilers the device shows a babytchi doing various little animations ripped from the Tamagotchi P1 device. Pressing the 'A' button will take you to the next puzzle.

Questions about the device are welcome!

One of my friends who are better at Picross than me is going to help me complete them.

Location
Prison of Nostalgia and Pizza

I'm a huge fan of picross what an adorable device.

Iamtamagotchi said:
I'm a huge fan of picross what an adorable device.
Click to expand...

I'm not the best at Picross, but it was a very lucky find!
I'm hoping to play through it all and upload all of it's puzzles, but at my speed it will be a while haha

Thanks for posting about this mystery device!

What is Picross anyways?? XD

Eggiweg said:
Thanks for posting about this mystery device!
Click to expand...

It's no problem! It's not every day you get the opportunity to document something like this. I've wanted a moment like this throughout all my years of collecting niche stuff if I'm honest. It makes me happy to share info on something like this.
Hopefully I'll get all the puzzles from it copied off it soon - it's dependant on how fast it takes for me to solve em until my friend who is actually good at Picross is in town.


Tacoburritotchi said:
What is Picross anyways?? XD
Click to expand...

It's a type of logic puzzle - similar to crosswords made popular in Japan. You have to create a black and white image using the numbers and grid provided, see the recreated puzzles and their results to see roughly how it's done.

Tacoburritotchi said:
What is Picross anyways?? XD
Click to expand...

A Nintendo franchise. If you have a Switch or 3DS you can buy it from the eShop for cheap. Since Nintendo popularized these puzzles, the name is often used for similar/identical puzzles like this device, but the actual generic term is nonogram puzzle. You can buy books with paper versions of these as well.