I'm having that Devilgotchi for many yeas, it was stored in a drawer. Recently, I reactivated it and somehow it has some LCD like looking stains at the corners of the screen...

Luckily these stains are very minimal and are not bothering much, but i still find it a bit sad. Does anybody know what could have caused these?

Does anyone know how to fix it? 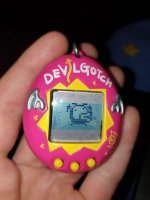 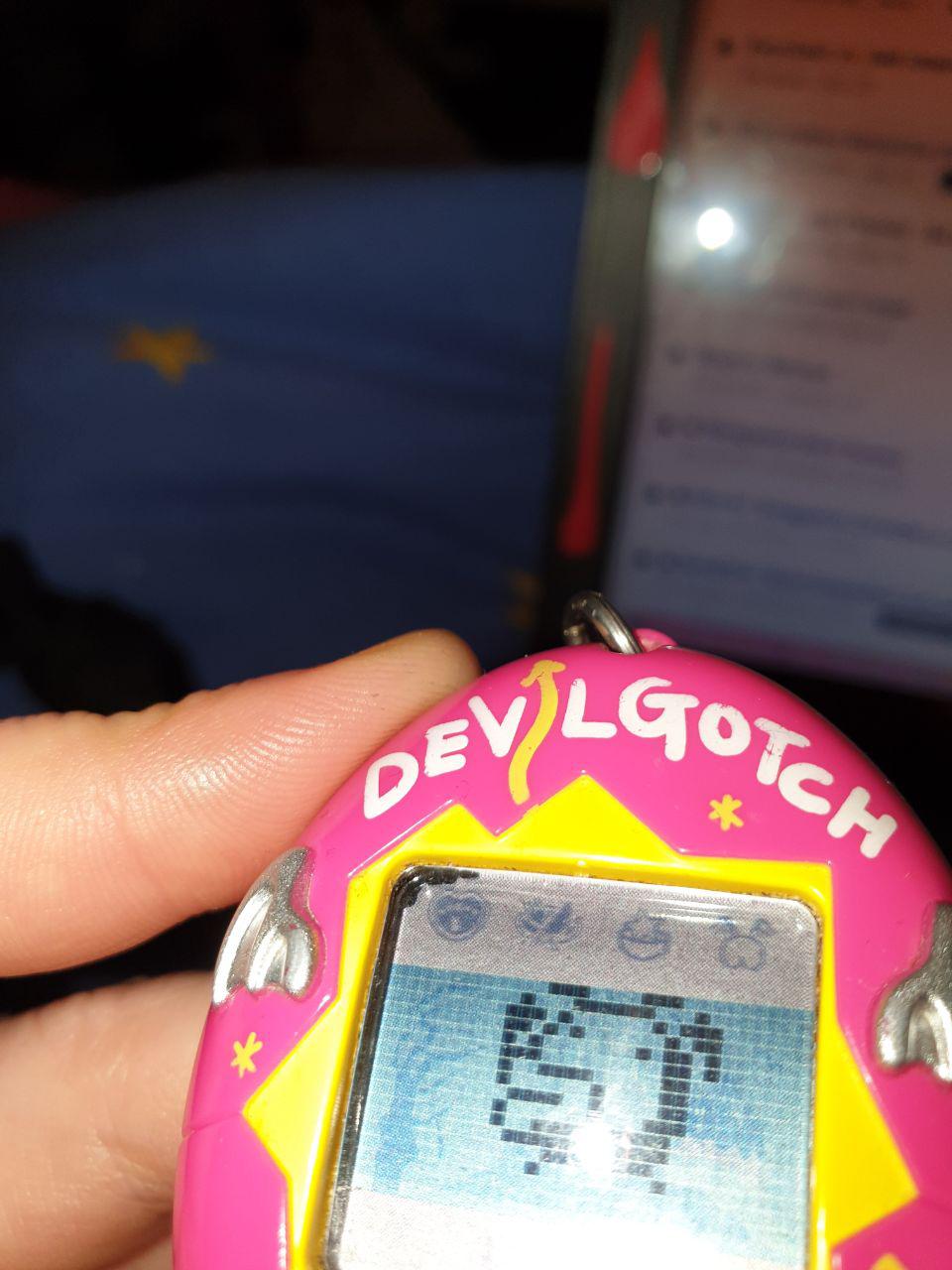 In the top left corner

Wow, you're lucky to have a Devilgotch! I'm glad to see that this issue is only minimal.

Sometimes leakage like this is due to pressure being applied to an LCD, but in that case it's usually localised around a crack or other noticeable damage to the screen. In this case, because of where it's appearing, I'm going to guess that it might just be age-related.

I'm afraid that I don't know anything about if or how it can be fixed - I wish you good luck with finding the answer to that.

i've never seen this before! hmm, again I'm no expert but I suggest looking for tamagotchi fan's who know the tamagotchi's insides and have that kind of experience.. Have you considered calling bandai or someone who may know? if not, why not give it a try.

Ok, I have a new explanation. I think the screen is put in upside down. Its rather hard to notice, but here's a picture of proof: 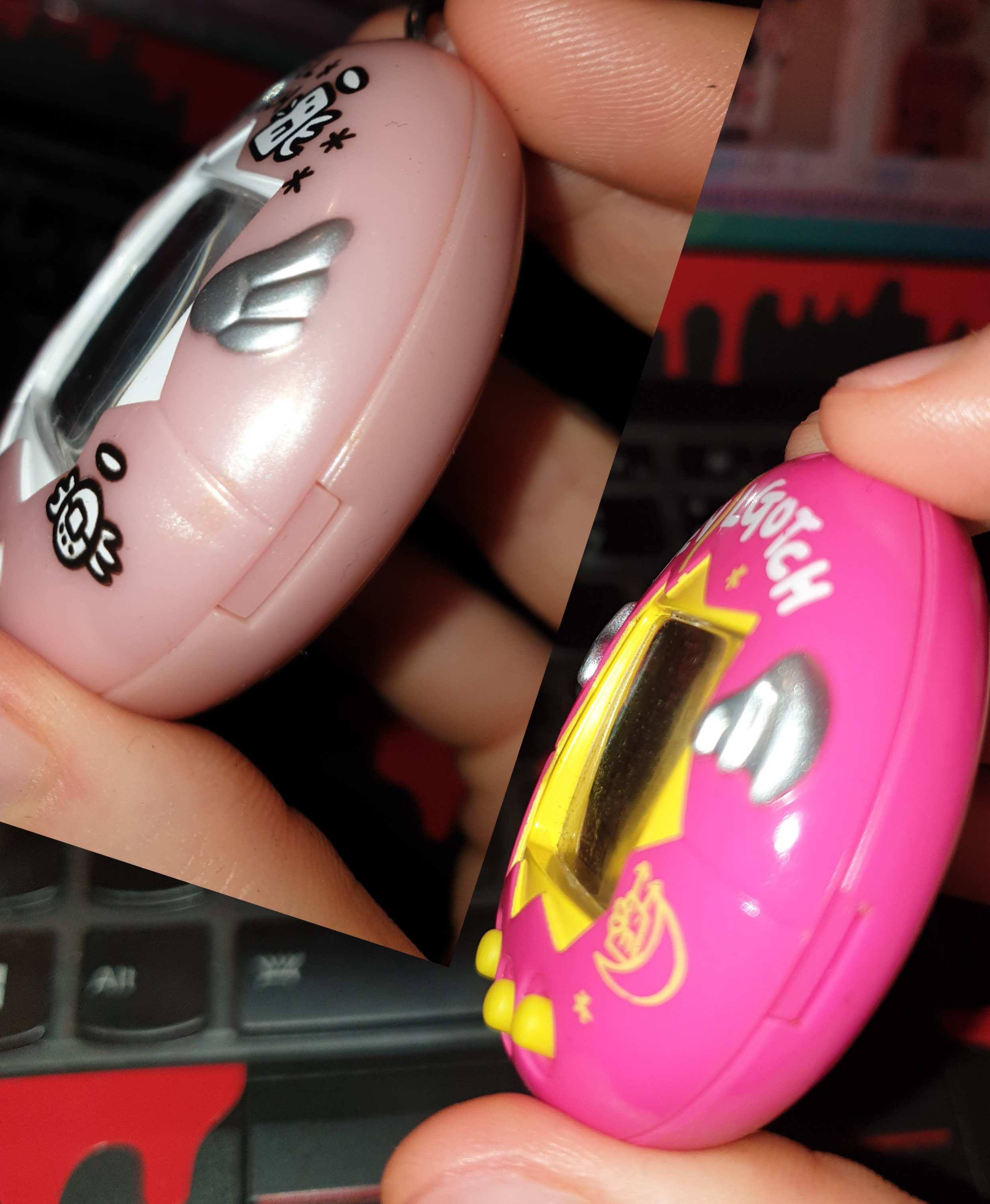 It must have been opened and put together incorrectly, I bought it used long ago.

I think I have to open it and put the screen back in the correct position. I think the side with the round part need to point downwards. I have some experience now, because I had to open up the Angel (reference in the pic above) .

Still very disliking the imagination of opening up some &gt;$300 item..... *shiver*

I'm currently trying to get the demonic twins, after that trial, i'll open it up. I currently already have old geezer Oyajidebiru. ^^

Putting it in upside down would cause additional pressure which may have led to a leak. If it's still broken, you can easily replace the lcd with another vintage tama's screen. The icons wouldn't be the same, but the display should work fine.

Here is a guide with pictures: https://necrobones.com/tamasurg/

It would work, but the icons were different. I'd never sacrifice the wicked devil icons, they're so great.

Devilgotchi surgey was successful! The screen is now right back in, everything works fine.

Btw: Its not very easy to open a Devilgotchi. Unlike normal 90s Tamagotchis, Devils have 4 more extra screws, holding the motherboard in place. That makes it much more difficult.

I just hope the LCD bleed will vanish over time. I think so, but if not, also not a drama. 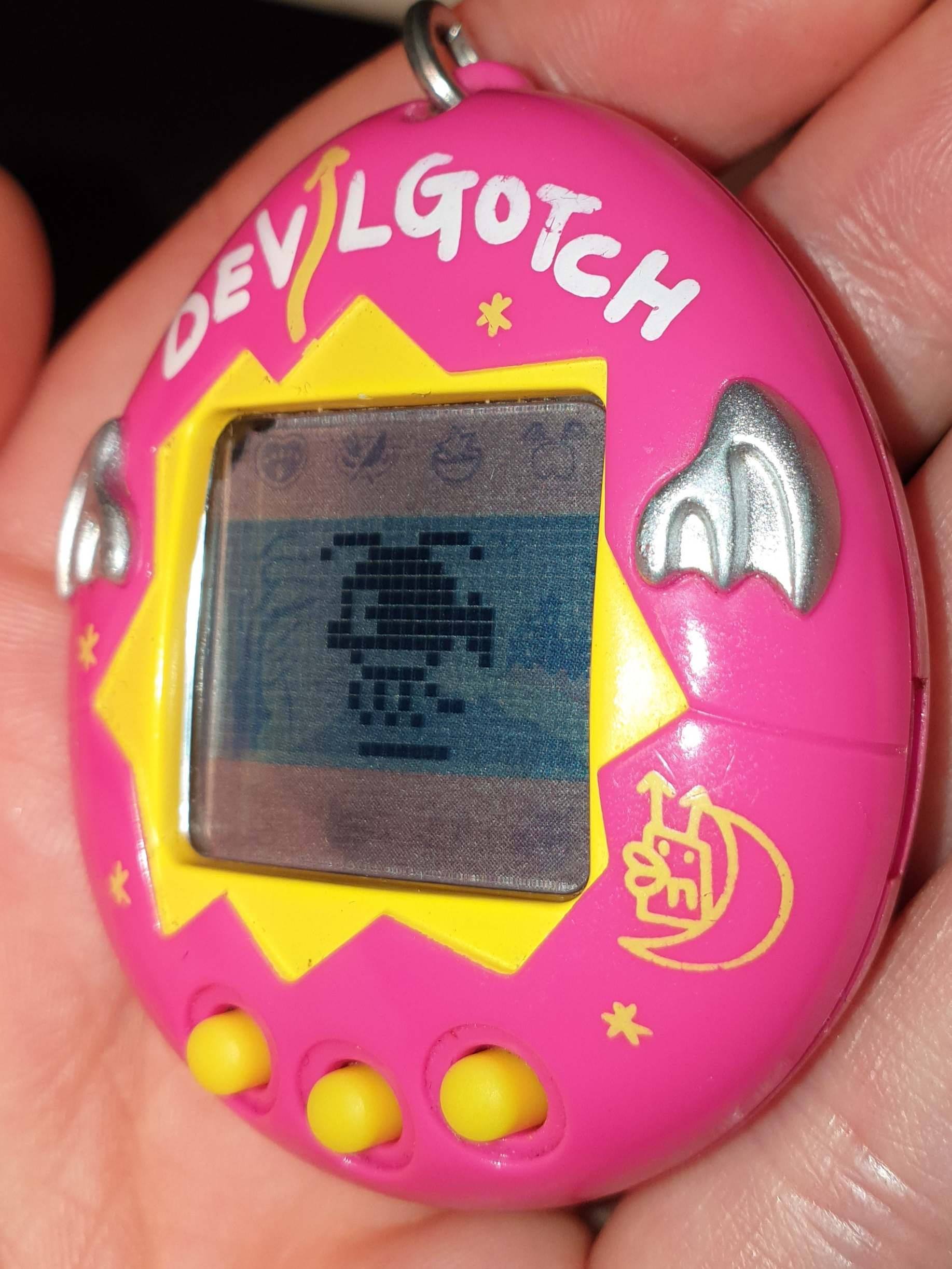 Trying to get the twins failed. I had Oyajidebiru with high DP, it didnt becme the Girldevil, it became the pumpkin head instead. Maybe try have Oyajidibiru with low DP next time.

ꌃꍏꌩꂦꍟꈤ_꓄ꍏꂵꍏꁅꂦ꓄ꉓꃅ said:
i've never seen this before! hmm, again I'm no expert but I suggest looking for tamagotchi fan's who know the tamagotchi's insides and have that kind of experience.. Have you considered calling bandai or someone who may know? if not, why not give it a try.
Click to expand...

Calling Bandai wouldn’t help, it would just escalate the situation further. The Devilgotchis were produced back in Japan 1997, and were recalled because of faulty screws. Unlike the Angelgotchi, (which is much more common to pick up, why I own one!) this is why they are so rare, because of there limited time on shelves. Since being recalled, Bandai discontinued the line and therefor, wouldn’t be able to give any advice to this day.

Now I have seen this a couple of times in advance, even on TamaTalk. There was a form with a Tamagotchi’s damage here, and there may be some comments to help. I have to point out this V2’s LCD leakage is way worse, there being a massive black rip in the screen. Consider yourself lucky with this one!

Another mention, there was a YouTube video with a girl asking about her Gudetama Tamagotchi (which I’ll put here for you to check out) and there still being more leakage. We can take this into account because it seems that this problem has passed down through all of the non-coloured Tamas, reaching up to today. I’m assuming something must have been on top of the girls Tamagotchi, as she says “It was in my bag, I took it out and found it like this” so something heavy (like a mobile phone, purse, etc.) was forcing itself on top.

Anyways, I hope your Tamagotchi can be revived, I’d love to see it!

The Escape From Reality