Hello everyone! I decided to share with you about this game I just recently installed on my phone like a few weeks ago (or maybe a month ago? I’m not sure), it’s called Dunpets! As you can see, I’m crazy about virtual pets and any kind of them! I’m pretty sure I’m not the only one here. I hope it's okay to post about a virtual pet that's not a Tamagotchi... I'll be logging about them soon too!

After watching Jaiden Animation’s videos about virtual pets and the Pokemon Nuzlocke run, I kinda wanted to play Pokemon too. But seemingly I was getting buried in a pile of assignments, I didn’t think getting into Pokemon again was a good idea. Then I thought about looking for a game that isn't actually Pokemon but is similar… Thus, I stumbled upon Dunpets! It was the combination of what I wanted and needed: taking care of a virtual pet and BATTLING. I was very excited.

But in the game itself there wasn’t really much to do. I hadn’t really explored all options yet. And as my assignments were piling up and the semester was getting difficult, I paused the game (which only told me I can do so once in my entire life). And now, it’s semester break and I felt like wanting to explore the game again so I finally resumed the game.

Upon resuming the game, I was immediately greeted by Stinger, who was waiting for me to play with him for weeks now. I had 4 Dunpets in total but he is the favorite child. I just love him! I mean, look at him. 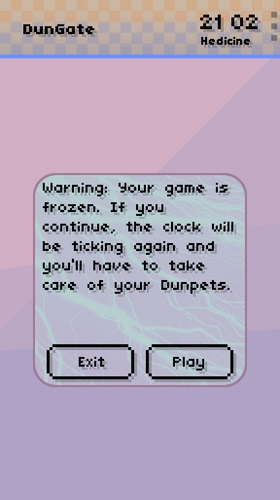 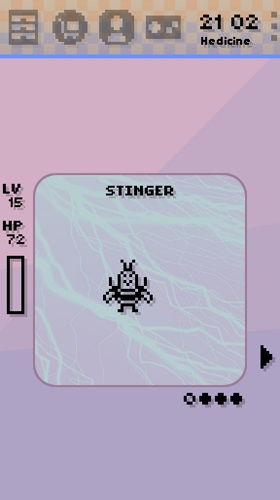 He’s a little tiny bee and I love his little face so much!

Anyway, since it’s been a while, I decided to take Stinger on an adventure in a dungeon. 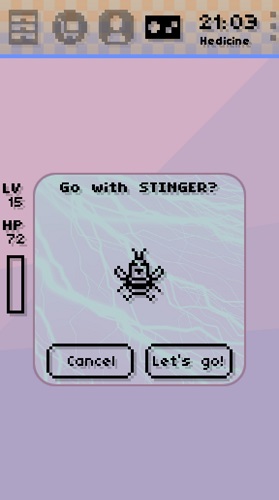 Everyday, the dungeon changes. It could be Earth dungeon, or Darkness dungeon, or Air dungeon, or Fire dungeon, and other dungeons I haven’t discovered yet. Each Dunpet has one of those elements as their power, and they reside in a dungeon that is suitable for them. So today we’ll be visiting the Earth dungeon, where we will encounter and fight Earth Dunpets. We can also find coins, treasure chests and new eggs in the dungeon.

We found an egg but then immediately stumbled upon this guy. 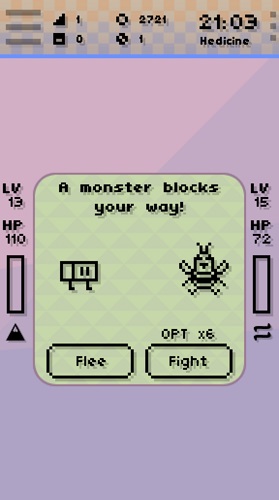 I wish I could adopt it or something because it looks sooo cute-
But then Stinger mercilessly annihilated it and leveled up... 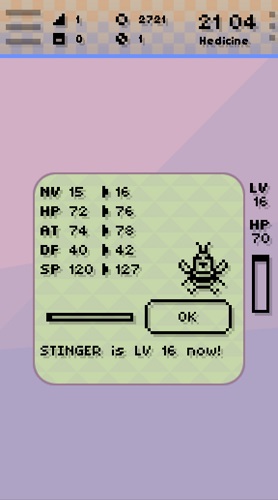 How could you be so cruel???

Anyway...  Continuing the journey, we also found this mole guy who wanted to fight. 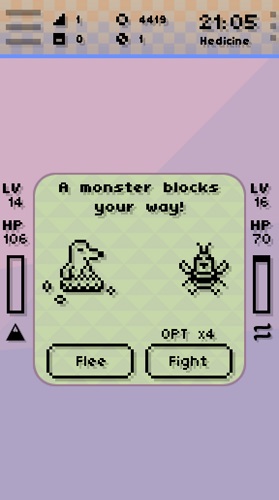 So of course, Stinger annihilated him too (like the monster he is).
On our way we also found ANOTHER egg! But turns out it wasn’t an egg- 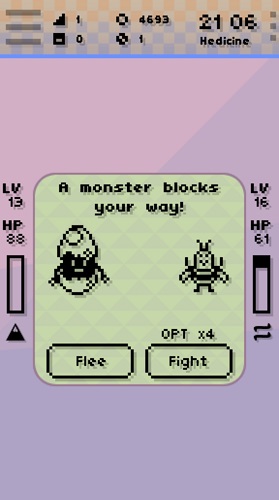 It was a MONSTER EGG! How unexpected! But Stinger, being 3 levels higher, very confidently defeated the egg.

We defeated a couple more enemies and leveled up before we went back home to save our progress on the dungeon, and immediately resumed our adventure. Stinger and I looked around the dungeon to look for more enemies to triumph over, but alas, it seemed like Stinger had annihilated all of them!

There was no option left but to go upstairs to the next level of the dungeon, where the enemies are stronger. 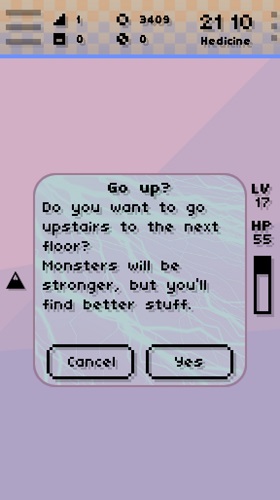 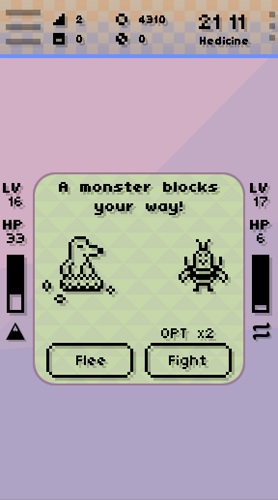 And he was READY because the first blow caught Stinger off guard! And it was a pretty critical hit too!

Luckily, Stinger was able to defeat him but he was in a critical condition. We snatched a couple of coins from the dungeon before quickly returning home. I gave a health potion to Stinger so he could regain some strength. 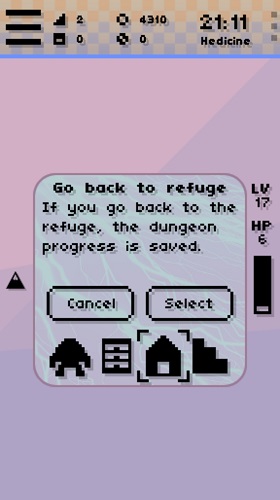 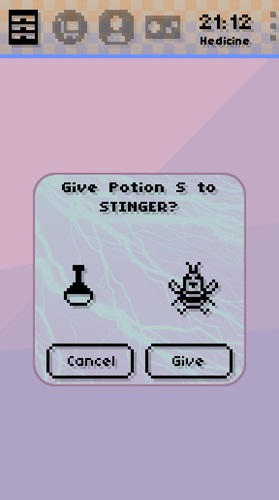 The potion could only increase 50 hp but Stinger was doing alright. I decided to let him rest for a while.

Now I haven’t told you about my three other Dunpets which were named Squirrel, Eyes and Darknet. 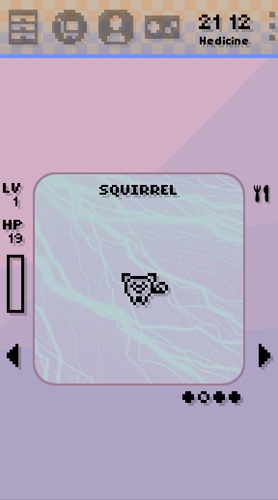 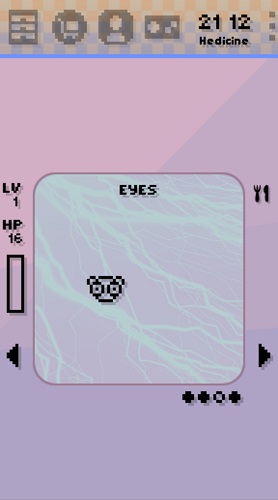 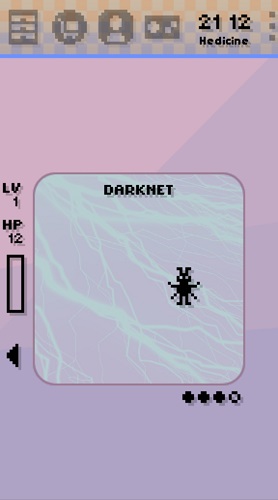 I like Darknet. He looks like a tiny cute ant so I kept him! But I don’t exactly find the other two Dunpets as cute so I don’t actually plan on keeping them. I was going to send them to the Dunpet Rescue Center to give them up until I find this option: 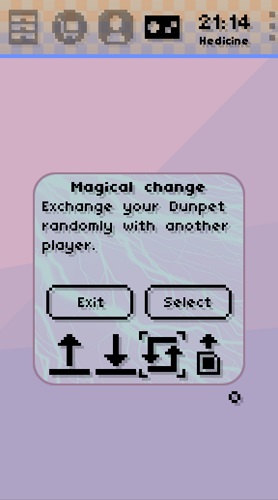 I never explored this option before so I was curious what kind of Dunpet was I going to get. I decided to try it out with Eyes. 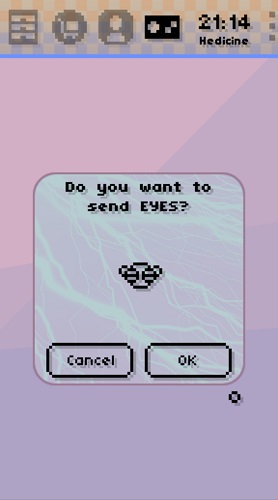 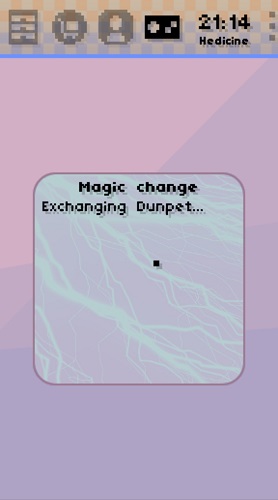 And I got a rock! Or a ruby? I’m not sure but she seems pretty big compared to my tiny Dunpets. 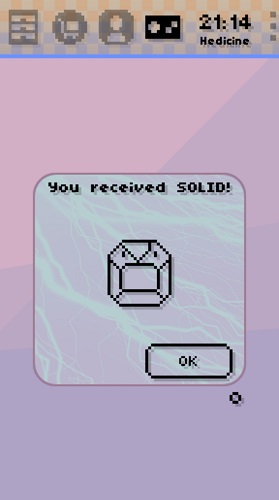 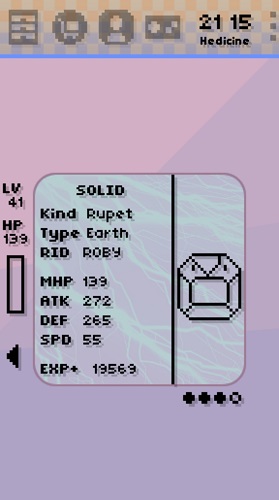 So Solid is a Rupet and is an Earth type Dunpet, cool! I got lucky on my first trade! And it also appears that her previous trainer was Roby. Thanks for the trade, Roby! Whoever you may be!

I also wanted to trade Squirrel, but remembered the the egg Stinger had found in the dungeon so I decided to hatch it instead. 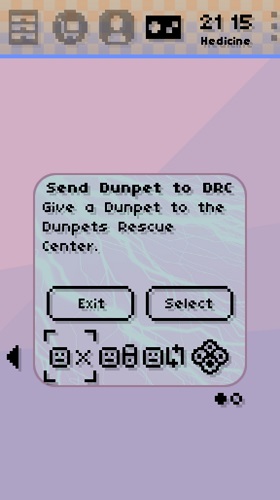 I sent Squirrel to the Dunpet Rescue Center so I can have another space for the hatchling. Bye, Eyes and Squirrel! Hope you guys have a nice life with another Dunpet trainer! 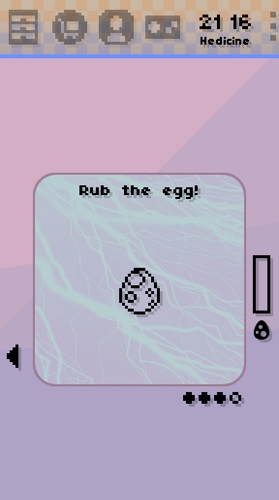 I rubbed the egg to hatch it and it hatched into a Jejunapi, which is basicall another Stinger species. And I wasn’t going to have two Stingers so I sent him to the Dunpet Rescue Center

I tried trading him before I sent him to the Rescue Center, but it didn’t work! Perhaps it’s only a one time thing?

Anyway, since Stinger was resting and Solid was still trying to get comfortable with her new surroundings, I sent Darknet to the dungeon. I figured it would be best to send Darknet out since he was still level 1 and needs a lot of catching up to do. On Darknet’s first encounter, he found a chest which contained a Happi Analyzer! I’m not sure what it’s for yet. But I’m gonna guess that it probably has something to do with maxing out happiness. 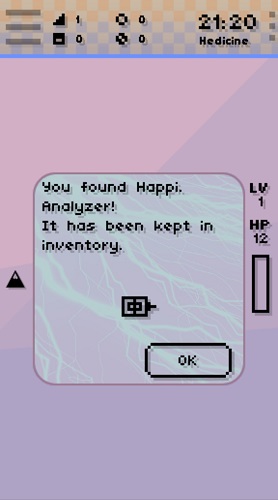 And then Darknet’s first ever battle! 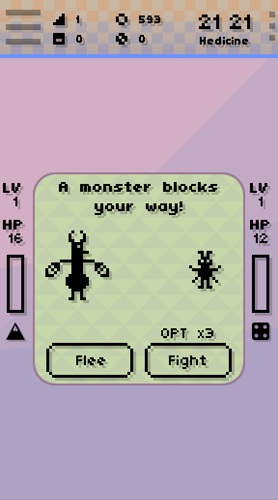 He was a little nervous since he was smaller than his opponent but he managed to defeat him and leveled up to level 3!!! Hooray Darknet!! 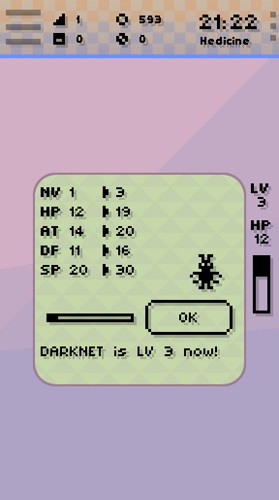 Darknet also found a Citrine and an Aquamarine! I’m not sure what they are for, but I think I can sell them for some quick bucks!

As we continued our journey, guess who we bumped into! 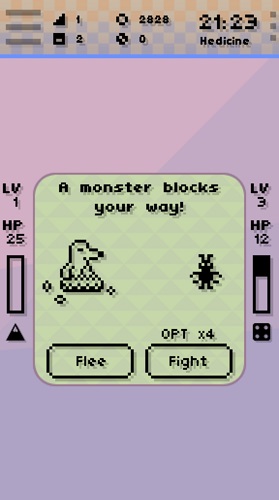 It’s the mole guy again! Man, this guy is really persistent, huh. Although Darknet was physically smaller than the mole guy, he managed to defeat him and avenge Stinger!

After the adventure in the dungeon, I decided to take a break for the day. I sold two wallpapers at the shop and got 6000 coins. And I used it to extend more space for new Dunpets. So everything was going great!

Well, that’s it for today’s log, folks! Sorry if it all sounds so confusing or boring, this is my first time logging (besides from the Tom Saga)! And for such a peculiar game too. I don't think I’m the right person to be logging about it since I’m not good at wording my sentences but I’ll still try my best!

Until next time, bye!

orangeslushieplushie said:
I hope it's okay to post about a virtual pet that's not a Tamagotchi...
Click to expand...

It's A-ok to do that - the logs section is open to all virtual pets!


orangeslushieplushie said:
Well, that’s it for today’s log, folks! Sorry if it all sounds so confusing or boring, this is my first time logging (besides from the Tom Saga)! And for such a peculiar game too. I don't think I’m the right person to be logging about it since I’m not good at wording my sentences but I’ll still try my best!
Click to expand...

I thoroughly enjoyed reading it and I'm looking forward to seeing more - I love seeing coverage of lesser-known virtual pets (or virtual pet programs for general-purpose devices), myself.

Penguin-keeper said:
I thoroughly enjoyed reading it and I'm looking forward to seeing more - I love seeing coverage of lesser-known virtual pets (or virtual pet programs for general-purpose devices), myself.
Click to expand...

I also like reading logs of virtual pets ive never seen before, its really interesting to learn about them

The Tom Saga: The Misadventures of a 168 in 1 Virtual Pet!

B
A Dear Diary