US Tamagotchi ON App shutting down in August

The gotchi noob said:
Bandi is ruining childhoods shutting down the app! (Kinda like chuck e cheese removing the animatronics!)
#keep the tamagotchi on app open! Bandi if you can hear this the only way you can make this up to the world is rereleasing the tamagotchi connections. Who's with me?
Click to expand...

I'm sorry to tell you this, but this is not how business works. Companies like Bandai exist to make a profit on their creations, so they don't want the previous version and its app remaining available forever - they want to move people on to the next "latest and greatest" new thing, and new iterations of their products serve that end, simple as that.

It makes no difference to them if people are shouting into the wind on the internet about them "ruining childhoods", and creating social-media hashtags treating it as some sort of cause (this is something that's known as "slacktivism", so named because it involves little or no effort and usually generates little or no returns) - that won't change a thing.

If you genuinely feel strongly about it, send the company a well-thought-out formal letter (checked by another party for errors if possible, just to make sure that it looks smart and polite when it arrives) through the mail on real paper, sensibly voicing your concerns and perhaps requesting some sort of alternative to simply removing the app forever; Though it is unlikely, perhaps Bandai might be ok with opening the source-code so that it can live on - it can't hurt to politely ask, because the worst that they can say is "No.". Though so much is done online these days, this remains one of the most effective ways of communicating your opinions and feedback in a meaningful way, and even if you don't get a response, you can at least be sure that your views will have been heard by the right people.

If on is like meets,then why dont they use mymeets on ON?

Dang, time moves fast. I really expected this app to last longer due to the novelty of interacting with people and their Tamas internationally. If I knew about this earlier I probably would've started my ON again to say goodbye to it.

I wonder what this means for the future of the franchise in the Western part of the world? The rate of getting color Tamas in English is still slow and Bandai seems happier localizing the lesser Nano editions rather than the more complex ones.

I logged some Bluetooth traffic, but other than the app and the device sending the word TAMAGO to each other at the beginning, I am not able to quickly make sense of the data. Has anybody (such as the creators of MyMeets) written an explanation of the protocol yet?
Last edited: Aug 29, 2022

The gotchi noob said:
Well we lost...
Click to expand...

Again, this is not how business works. Quickly jotting down a hastag was never going to make a difference to a decision that was announced in February, and most likely planned out before the device was ever released.

Probably a dumb question, but will this affect the MyMeets app?

decepticoncrown said:
Probably a dumb question, but will this affect the MyMeets app?
Click to expand...

MyMeets is fan-made, so I don't imagine that it will.

That said, I haven't used it (it's not available for my operating system, and I was happy with what the Meets/On device offered without the app), so I can't be absolutely certain on that!

I'm so sad. This is one of the main reasons why I bought an ON in the first place.

Managed to slide in at the last minute and marry one of my tamatwins to Mimitchi!

I had trouble connecting my Tama to the app, so I was worried there for a lil bit!

Last call, only a few hours left!!!
I definitely got some good footage of the app over the past few months. I'm sure not everything, but this last recording will be in a vlog very soon.

I'm off to go play with my digivice V.

RIP On App. It was fun

No God please no no nooooooooooo

The app has shut down… rip…

Now when you start. You will forever be trapped in the loading screen

TamagotchiLover16 said:
Now when you start. You will forever be trapped in the loading screen
Click to expand...

Why doesnt it show a error of cannot connect to the server?

Because I gave up after a while

Oh no it went out with a bang like miiverese

And for this I changed my profile banner to this 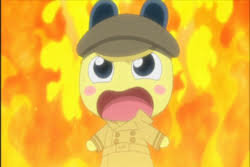 
leogames2012 said:
Why doesnt it show a error of cannot connect to the server?
Click to expand...