What are you watching now?

@TamaMum, do they have The Castle of Cagliostro on there? Because that (especially its earlier dub, though both are good) is a most excellent Ghibli film.

Location
Trapped in the Moderator's Gate of Truth

Penguin-keeper said:
@TamaMum, do they have The Castle of Cagliostro on there? Because that (especially its earlier dub, though both are good) is a most excellent Ghibli film.
Click to expand...

Yep!  Don't know which dub but one of the best, although the animation style is a little different from much of their later work

You can tell them apart because the earlier one has Lupin III referred to as "Wolf", instead.

I’ve been watching the Marvel series for the first time over quarantine, just finished Infinity War last night! How have I gone so long without watching any of these films?! Theyre so good!!

Location
chillin' with my tamas

TamaMum said:
Lots of Netflix right now - mostly for light relief with the family in the evenings - Kim's Convenience, The Good Place and very happy to be re-visiting a load of Studio Ghibli films that Netflix just launched - ah... Porco Rosso and Totoro - good memories
Click to expand...

I love Kim's Convenience and the Good Place!! Sadly finished both, but they are such good shows. I've been watching Naruto, Bob's Burgers, and Spirited Away. Also Cable Girls and On My Block.

I definitely recommend it.

the past year ive been watching lots of doraemon, its a funny and cute anime with some really heartfelt moments in it. also the animation in the movies??? absolutely amazing

I've also been watching pokemon journeys too, its really good

@Lainey cassels - Don't worry about that in ongoing threads like this one, the collection thread, the what-did-you-get-in-the-mail thread, and so on - the no-bumping rule is meant for cases where information in a thread can go out of date, and therefore confuse people if it's brought back again. It's perfectly ok to continue a thread like this, within reason.

I watched FullMetal Alchemist, and then FullMetal Alchemist: Brotherhood. I plan on watching Dragon Ball Kai next (only seen Z). I plan to watch more of the classic anime I never saw when younger, like Evangelion. I'm also rewatching the Sopranos with my partner (who hasn't seen it), when we both can watch together.

I most recently watched the uncut version of the 1986 live-action movie adaptation of Howard the Duck. Yes, that one, the first Marvel movie ever, with the bad reputation for being a flop that almost ended George Lucas' career.

I watched the original PG-rated UK release as a youngster and, though it was a little bit disjointed, I found it good fun - enough to pick up the tie-in computer game for the Commodore 64 (which is less fun - it feels like its team weren't given enough time to flesh it out), which I also revisited a few weeks ago. I recently picked up the uncut version of the movie on DVD (which carries a 12 rating in the UK), and found it even better - the restored footage allows the whole movie to flow properly for the first time, and it's just as fun as it ever was.

The script is quick and funny, and if you blink you'll miss several jokes and references at any given moment. And there are a lot of duck puns, too. There's even a hilarious point where the villain - a demon from outer-space that has possessed the body of one of the side-characters and is gradually transforming him into a monster - briefly abandons his grimdark monologuing (which, amusingly, nobody is listening to anyway) about how the world will see all-encompassing doom and neverending hell on Earth, simply to make a sarcastic and mildly-irate grumpy-old-man one-liner about the main characters, before going back to what he was doing before. It's humour that most people didn't get back in 1986, but which is hilarious to absurdist sensibilities in 2021 (at least it is to mine, anyway

George Lucas always held that the movie was just released in the wrong decade and that it would be appreciated better in the future, and I have to say that he's right. The film clearly never takes itself seriously for a moment, so I'm not sure how anyone watching it ever tried to do so back in the day!

I suspect that, were it released with minimal alterations tomorrow as a new MCU movie, without the baggage of its 1980s reputation, it would probably be a big hit with the crowd that enjoys the irreverent comedy of Guardians of the Galaxy (whose movies happen to aim for a similar sort of soundtrack and vibe to this one) and Deadpool - characters that, not surprisingly, Howard has been published alongside in the comics. If you're old enough and don't mind the look of the animatronics (I personally think that they're well-done for the era, especially considering how little pre-production time the movie was given), give it a watch - it's actually better than people say it is, there's almost nothing in there to show its age (one scene features a pager beeping and its owner saying that they need to take a call, but you never see the device - modern viewers would just interpret it as someone receiving a text-message on a mobile-phone), and you don't need any knowledge of the comics to enjoy it for what it is, since it's kind of a standalone thing.

Guru Guru Town Hanamaru-kun. Despite that someone uploaded 98 episodes in Mandarin on YouTube and I don't have the entire series on DVD, why not?

Since my discovery of Digimon Ghost Game, I've been watching that... but since I have to wait each week for episodes, I'm watching Digimon Savers in the meantime since I've never finished it. After that I might pick up Tamers since I never finished that one, either. (Frontier is my favorite Digimon series btw XD)

I'm also trying out Ousama Ranking and liking that one a lot, too.

tamatown123 said:
The title says it. What are you watching now?
Click to expand...

I just got finished with season 3 of Infinity Train and I'm hoping to get started on season 4 pretty soon here. No spoilers, but season 3 was a lot darker than I was expecting!

I'm not complaining though because this might have been my favorite season so far. 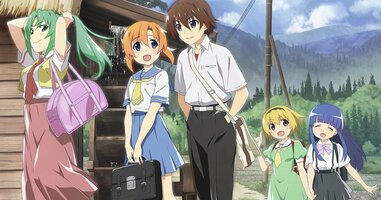 I finished season 1 of Higurashi: When They Cry.

And started the second season of this anime, and oh my god! This is a masterpiece!

When it comes to psychological horror/mystery genre I can definitely see why this anime is on the top of the list.

The storyline is definitely still unclear to me and still confusing which is I guess part of the whole thing. I will keep watching the old ones and start with the new remake and see what is really going on.

I recommend it for those who like the mystery/murder.

I've been watching Fraggle Rock. I binged all 13 episodes of the new reboot in a day and I've since been rewatching the original 80's series.

After totally ignoring Marvel movies my whole life, I've finally started watching them with my boyfriend. We are watching them in order from the beginning, the most recent was the first Dr. Strange movie.

Where can I watch Tamagotchi anime?

A
How to post a thread, send a PM (conversation).

Are you watching The Triplets?

My First Adult Evolution. What Was Yours?