I got myself some batteries and... 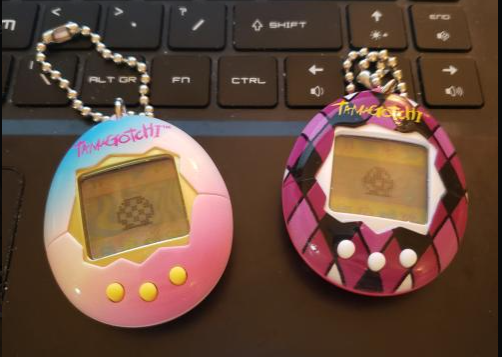 Maynard and Blaise are back!

If you didn't know, I named them after the singers of band MONKEY MAJIK, so I'm calling this a MAJIK-al revival

My goal is to get the secret characters on the rereleases, something I have not yet done. I got Bill, Oyajitchi, and ... the bicycle guy (forget his name XD) on my classic ones but haven't gotten the secret characters on the rereleases. I'm hoping the requirements are pretty similar (being based mostly on Discipline) but who knows, with these being pretty different from the originals.

I originally named the P1 Maynard because he's my favorite of the two singers and P1 was my favorite when I bought them. But now P2 has become my favorite (it has Kusatchi and evevn more importantly, NUMBER GAME instead of character game!!) so it's kinda funny. I still like Maynard's shell better though. I can't wait til I have some spare cash so I can get that anniversary one that everyone but me has :O

Anyway, if I do manage to get the secret characters, this will be my first time getting Zatchi ever! So that'll be cool

I started them at 7:30PM so as soon as they evolve into child stage they will go immediately to sleep XD They are just noisy little babies right now

I don't like the western P2 egg... it's kinda ugly. The original eggs are much cuter. Who ever heard of a checkerboard egg?? I think because of Yoshi and my childhood P1, I feel like eggs need to have spots... hahaha. Or just solid color is good I need to get the other series of JP P2 so I can get the sumo guy (also forget his name... I can't keep track of all these characters XD)

I also got 2 Digimon X that I've never opened and am thinking of opening those up to log them... what do you think?? Or should I stick to just these two guys right now?? Also who else is raising a P1 or P2??

Oh my goodness, MONKEY MAJIK...takes me back. Welcome back to your Tamas!

Thanks! I got really obsessed with MONKEY MAJIK when they released their COLLABORATED album and Umarvelous got big XD

Today I forgot I was even running them and slept in... so I already got at least one care mistake lmao. Maybe we won't get the secret characters this time... XD;; I'll try to be perfect from here on out!

The great thing about the secret characters is that you don't have to be perfect...unless they changed the programming in the re-releases??

Yeah, I'm just worried I'll get too many care mistakes at this rate. Waking up like 3~4 hours late got me at LEAST one so I have to be careful from here on out XD and i have kind of a busy day tomorrow so I hope I can watch over them properly 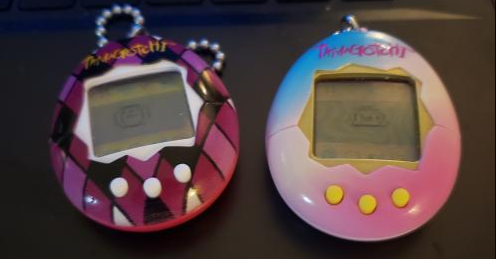 Caught the boys mid-motion so they're a little blurry.

Not much going on today; they are 3 years old. I took them to bed with me so I didn't miss any calls, but I ended up waking up before they could call anyway. Opposite of yesterday hahaha.

I have been keeping good tabs on them today, even through my busy stuff. Well, it was mostly the morning that was busy. I took a loooooong nap with them by my side. So long, in fact, that when I woke up they were at 0 hearts (woke up to them calling for me XD) And I had fed and played with them just before I laid down, too!

Still considering pulling out the Digimon X but IDK if I wanna run 4 pets right now XD I don't have a lot going on so it wouldn't be too big of a deal but I just don't know if I'm feelin' it, ya know? Like, I have a hankering to play with the Digimon but I also don't want to feel overwhelmed XD IDK how hard Digimon X are to take care of. I'd be going into it blind

Oops, I was listening to something with headphones and missed their calls for goodnight. So I didn't turn the lights off for them until like an hour later, because I wasn't paying attention That's at least 2 care mistakes now. Hopefully I can actually get them to evolve into their good forms XD Can't make any mistakes tomorrow! 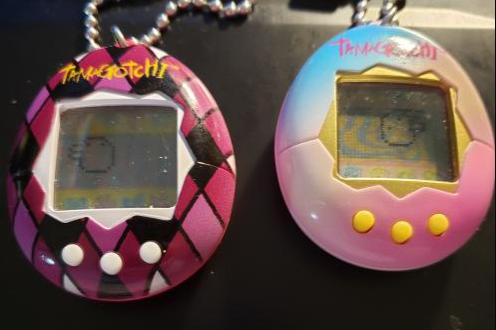 Well, my boys woke me up by evolving this morning. They went into their "bad care" forms so it looks like no secret character for me this time.

But I don't think I've ever gotten Kuchipatchi and Hashizoutchi on the rereleases, so I'm going to try for them

ETA: Actually I just remembered that I didn't get any discipline on them in their child forms, so they're not able to evolve to Kuchipatchi/Hashizoutchi XD Well, I'll just take care of them naturally without any aim and see if I get the mid forms or the lower forms. They misbehave often so I'll probably be able to get the 100% discipline needed for the mid forms, but the evolution criteria are unpredictable in these ones XD 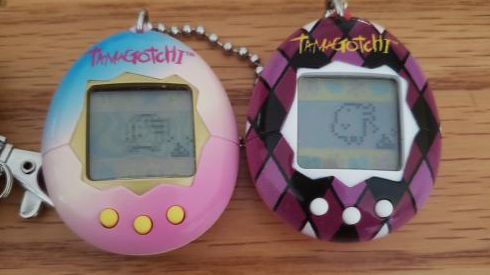 Surprisingly enough, the boys grew up into their high-tier counterparts! Wasn't expecting that at all... On the OG devices this wouldn't have been possible since they evolved into their teen forms with no discipline. But here we are! The evolution requirements on the rereleases are a mystery indeed...

So here's a picture of them with some poo. Kuchipatchi looks like he's sniffing it LOL

Hashizoutchi is very cute. Of course, I'm a Kuchipatchi fan but the P2 characters have grown on me so much...

I'm not sure if I want to let these guys live out the rest of their lives or reset them to try for the secret characters again. Blaise didn't have a brand-new battery like Maynard did, so IDK how much more he has left before he goes kaput. 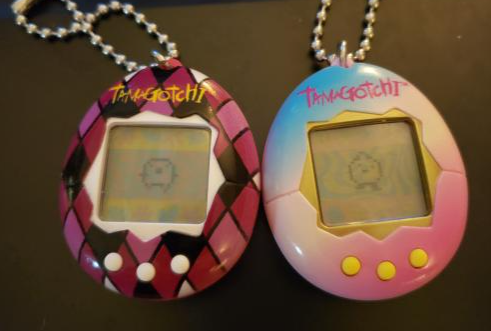 I did end up resetting them after they reached adulthood, mostly because I'm worried about Blaise's battery.

Today they grew up into the good teens I have yet to get any care mistakes nor have I done any discipline, so I should be on my way to Bill and Zatchi!

I'm excited for the Digimon X log! But I like that you have a goal here so maybe focus on that and after you get some of the secrets the start up the Digimon X?
When I see plaid shells I always think of them as having been decorated for Easter or something haha!

I actually did start the Digimon X log I decided to make it a separate one from this one. It's the one called META-X and POD-X in the logs forum 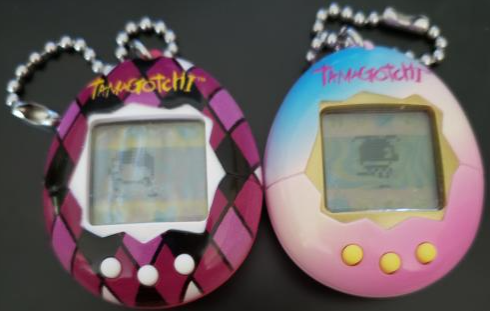 The boys grew up today. They woke me up at like 930AM to evolve then immediately went back to sleep since they became late-sleepers... so I had to turn their lights out again XD I wonder if that makes their age go up a second time...? I think it did, because I think they were 6 yesterday and they're 8 now XD So they aged up 2 years in one day! XD

Speaking of years, does anyone else think it's funny we call them "Teenagers" when their ages are not in the teens? I always thought that was funny XD

Maskutchi is such a cutie. I love all his animations.

Zuccitchi is cool but not as cool as Maskutchi ^^ Score 1 for the P1 gang!

Still have yet to make any care mistakes, so I'm safe for a while. Hopefully I don't mess up. If I understand correctly, you can make like 5 care mistakes and still get the secret characters, so I SHOULD be good. My goal is to get 0 care mistakes though

And now I can finally start disciplining these little buggers for their bad behavior!

Told my psychiatrist I was raising virtual pets today and she told me to get a real pet lmao. 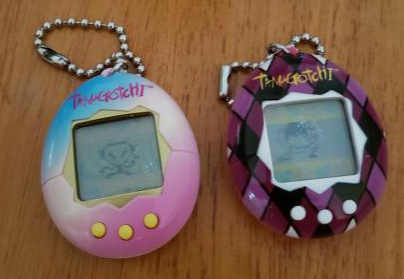 Zatchi is the one I've never seen though so that was fun I got Bill on a vintage P1 already.

Zatchi is kinda boring for the most part as it just stands in place and has like 2 frames of animation which are basically just mirrored images. Though its "happy" face when it wins a game or you clean the poop is very cute and funny looking.