So, if you've been active or lurking here for the last month or two you've probably seen me talk about this odd pet. After retiring my 20th anniversary Digimon, I'm finally ready to run it! From the information I could find about this, it seems like a very unusual virtual pet. It's based on the franchise GeGeGe no Kitaro and you take care of one of the yokai from the series. The creature's name is Medama Oyaji, but for this log I'm going to be calling him just Oyaji. He's an old man! (At least that's my understanding of the character. I've never watched the series, lol) The one I own is well-loved, but it's still a nice looking device regardless. I love how it looks like an eyeball - if only it was rubbery or squishy! It will also roll away from you (it's very round), so putting it in some kind of case is recommended. 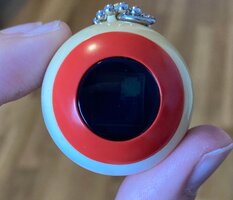 It doesn't seem to have a special start up screen, there's no bouncing egg or waiting period. As soon as I put in the batteries a giant pupil was staring at me. Pressing the button on the back of the device gives you a full body shot of Oyaji. From my knowledge right now, it doesn't seem to do anything else. 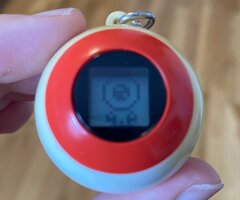 Tapping on the device is how you interact with Oyaji. I've already seen him do a few things, The first one I got was of him tripping and falling which made him cry. Poor little guy! 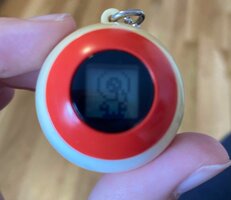 It also seems like the device responds to movement in general, there were a few times he started doing something when I was moving him around and wasn't tapping on the device. There's also no clock feature or stats, so I'm curious how you take care of him. I'll keep everyone posted!

Oyaji is a moody little guy. As I write this, it's been a day since I've started him up. His animations haven't changed, so far I've found a total of five:

I'm guessing that I have to improve his mood if I want to see him do anything else. Trying to get him happy is hard! I did discover how you access the minigame last night - you tap on the shell once, making Oyaji leave the screen, then tap on it another time for the game to start. The objective is that you're helping Kitaro warm up a bath for Oyaji.

​
The idea is simple enough, you keep tapping the shell to keep the pot at the right temperature (it looks sad when its cold, angry when its too hot, and happy when it's just right). It requires a lot of tapping, so it's very easy to make the temperature too hot. It also cools down very quickly, so accidentally giving Oyaji a cold bath is also very easy. In the images above, I failed and gave him a cold bath, which made him shiver and sneeze. I have never ran one of these, but it reminds me of the Tamaotch - it also had a "tapping" mechanic in it, which from what I've read is a controversial feature of that release. I know the Tamaotch also responded to sounds, which I haven't tried out yet on this particular pet, but it's worth trying in the future. (Family's over right now and I don't want them to think I'm strange for clapping at a plastic eyeball)

With most virtual pets, when you play a game four times that usually maxes out their happiness. This doesn't seem to be the case with this release - Oyaji is just as depressed, even after successfully playing the game several times. If failing at the game makes him unhappy, that's really rough, as the game in this is fairly difficult. There's a good chance that there's something I'm overlooking/not understanding though. I'll examine the instructions tomorrow and see if I get any new results.

Oyaji has been in a better mood the last couple of days. I haven't seen the "sad, kicking the ground" animation in a while. Lately he's been dancing and looking bashful afterwards:

​
Some of the character cameos have also changed. The Haniwa hasn't appeared in a while, with a ghost and a little girl appearing instead now. I'm assuming these characters are from the show - I'm not sure what their names are! When these two appear Oyaji responds positively.

​
He's also been working out a lot lately:

​
In my last post I mentioned looking at the instruction manual again hoping to get more ideas on what he can do. Unfortunately, I do not know Japanese so it wasn't much help. A friend of mine has a translation app and attempted to translate some of it - they're not very good translations, but it did help a little.

​
This is the translation that stood out to me the most. The pet has no clock in it which made me believe it had no sense of time, but it seems to have some understanding of it. I guess this is why the Haniwa went away and I'm now seeing the ghost and the girl. I also wonder if the longer the pet is ran the more Oyaji likes you. He's definitely acting differently now!

On a final note, the incorrect translations my friend got are really funny, which will leave you with more questions than answers: 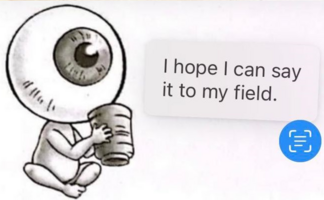 Apologies for the lack of updates in the past week! I've been busy with the holidays and all. Because of this, I haven't spent a lot of time with Oyaji. Poor little guy is back to where I started with him - I've been getting the "sad" animations again. The Haniwa has started visiting him again also. I wonder whoever visits depends on his mood. Since I've taken several steps backwards, the next several days I'm going to try and make him happy again. Some of the reason why I've ignored him in the past week is that he's a relatively low risk virtual pet. In other words, he can't die. Unlike a traditional pet, there isn't much need to regularly check up on it. With Oyaji I've also been running a Evatchi, and it one seems inspired by the other: 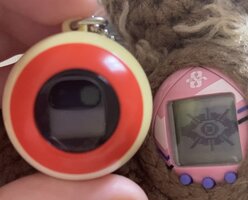 There's something about these two together that makes me think of this: