July 19th, 2021​
Entry #001 ​
Hello and welcome to KeroPyontchi's new-and-improved Tamagotchi log! ​
This is Mochi. She is the third generation of three girls in a row on this v3 here. She is also the third Tamatchi I have gotten in a row! Nonetheless, I am determined to take good care of her because her grandmother was a Masktchi, and her mother a Warusotchi (pineapple looking gal), both considered "horrible" care adults. 13 year old me would be shaking right now! Maybe now that I know other Tamaparents are reading this it'll push me to take better care of mine. A log with only the worst care characters over and over would be way too repetitive and boring. 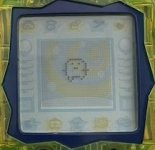 ​
(Please excuse any formatting issues as I get the hang of this again)  ​
I'm currently on the hunt for the next Tamagotchi or virtual pet to add to my collection rebuild. There's a lot to consider here in terms of budget, what version to get, where to buy from, ect. I'm not in a hurry to rebuild my collection too quickly since I know I'm an impulsive person. I also have some sort of color Tamagotchi back at my parent's house, I'll have to look back on my old logs to see what version it is, and maybe I can run that one too!

Not really much else to say today, I'll update tomorrow when Mochi evolves.

Until next time, thanks for reading  ₍˶ˆ꒳ˆ˶₎✼:♡*ﾟ✿

July 21, 2021 ​
Entry #002 ​
Helloooo and good morning~ ​
I could not post my log update yesterday as promised because Miss Mochi decided she wasn't going to evolve until after my work day was over, and I leave my laptop in the office overnight. It's not really on her, though- at some point during that first day I logged about her, she got accidentally paused in my bag. I hadn't checked on her in a couple of hours and when I did, I saw she had been paused. I immediately unpaused her and she turned 1 on time the next morning, but did not evolve until sometime last night actually. While she was a Tamatchi I was getting annoyed because every time I checked on her, she was rolling around the screen as if she had nothing better to do  . Like girl you don't need to evolve or anything? 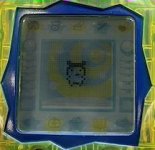 ​
Mochi is now a Young Mametchi! ​
This is probably one of my favorite of the teenager characters. It definitely feels nice to get her, it means I've been taking better care of Mochi than I did on the previous generations, their teenager stages being Nikatchi and Hashitamatchi. I'm curious to see what her adult stage evolution will be.

I probably won't update for another couple of days. Mochi isn't due to evolve for another two, maybe three days since she's behind from being paused a little. When she does, though, I'll make sure to add an entry.

Until then, thank you for reading!

I left Mochi behind at work on Friday   I thought she was for sure a goner! However, when I finally got back to her this morning, I see that the battery has run out and the attention icon is still on. I don't remember if it always does that or not, but I'm thinking there's a chance that the device battery actually died before Mochi did, and a reset and download could bring her back to me.

I am stopping by the store today for a battery so I will update tomorrow with a new entry, either about Mochi or a new Tama! Let's see what happens.

Until then, thanks for reading!