PIX (Gen 5) - Sebiretchi
Sebbi is 12 now! Honestly, not too much to report, just trying to fill in the Notebook and hanging out together.

ON (Gen 8) - Quince
Quince is honestly super cute and very on theme with Easter: 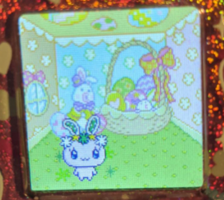 Hard to take good photos, but he's a very light mauve with green ears and cute little blue eyes. So I'm going to keep him for a while, he is actually just too cute. I got REALLY lucky with these genes, here are his Family Photo and previous tier on the family tree: 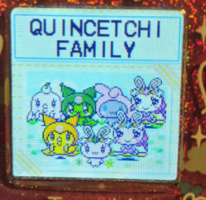 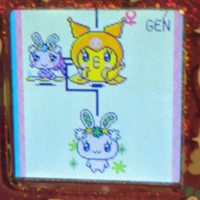 Love that he picked up the bunny ears/flower crown and lost the big head/mask thing and the meh fish lips. I also love that little smile he picked up, reminds me of this emoji :3

And I also feel that you don't see that little smile very often, so I'm extra happy with it. Do you guys think he is cute enough to loiter in the app and let people grab eggs?

MEETS (Gen 6) - Deless
I actually forgot to log about who I had after Bixby - her name was Cinna (named after the mineral Cinnabar), but she married young and now we have young Deless: 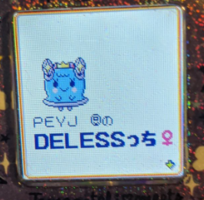 Note the Himetchi hair style which is apparently sticking around for this generation. Deless is named after Delessite (magnesian chamosite), continuing with my minerals theme. Delessite is apparently not considered a valid species, but it looks like this: 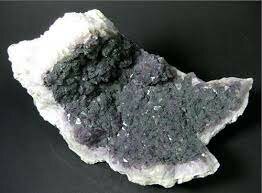 Peyj said:
Quince is honestly super cute and very on theme with Easter:
Click to expand...

Oh my goodness, does he have little polka-dots inside his green ears?!

That looks SO cute - it's like what you sometimes see on little plush Easter-bunnies!

Penguin-keeper said:
Oh my goodness, does he have little polka-dots inside his green ears?!

That looks SO cute - it's like what you sometimes see on little plush Easter-bunnies!

I got super distracted with a busy day at work and accidentally left these guys alone until the afternoon and I lost Quince. Lost my favourite one of course.

I panicked and tried the Reset/Download trick [yes I'm a filthy cheat] but it didn't work so not only did I lose Quince but I lost all my other progress. Sigh.

So, lost Quince and now it looks almost certain that my Meets has the Peter Pan bug. I tried the suggested fix but it didn't make any difference. Giving it another day or so and then I'll reset it too, I guess. I'd just neglect it but I think I need to reset it to unlock all the areas on my ON again.

So, lost Quince and now it looks almost certain that my Meets has the Peter Pan bug. I tried the suggested fix but it didn't make any difference. Giving it another day or so and then I'll reset it too, I guess. I'd just neglect it but I think I need to reset it to unlock all the areas on my ON again.
Click to expand...

Ahh I didn't even know this was a bug im sorry this happened to you T.T

Hydric said:
Ahh I didn't even know this was a bug im sorry this happened to you T.T
Click to expand...

Thank-you! I was super bummed about it but I've finally decided to embrace having to restart over.

PIX (Gen 5) Sebiretchi
Oops. Sebby has been going really well (she is 25 now), but the other day she had some really bad luck and I had to call an ambulance! They rushed her to hospital and she has been fine ever since.

ON (Gen 2 - Reset) Anise
Anise is my new ON buddy, she is currently 2 years old.

MEETS (Gen 2 - Reset) Aero and Azure
Aero and Azure are my new MEET buddies - twins again! They are currently 1.

Tomorrow I will post a proper update with pictures, but that's where I'm at now. A bit disappointed at having to start the ON and Meets again but we are on our way.

Peyj said:
A bit disappointed at having to start the ON and Meets again but we are on our way.
Click to expand...

I'm sorry you had to reset them! Must be horrid having a lot of progress and having to start all over again. Wishing you luck!

PIX (Gen 5) - Sebiretchi
I discovered today that Borscht is another one of Seb's favourite foods.

Also, does anyone else think it's a bit dodgy for the babysitter to not feed your Tamas?! Like gosh I paid you a fee and you didn't feed her even once! 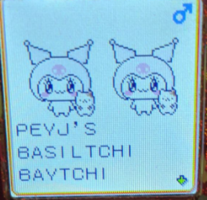 I had been trying to get the cat gene for a while and I finally got it with these guys, but... I'm not really a fan of any of the other genes they have. So I think I'm going to roll the dice on the cat gene and try again.

In case anyone is wondering, I am using "herbs and spices" to name my ON Tamas this time around.

I learned that there are 100+ species of basil identified and of the culinary types, the flavours range from cinnamon to lemon!

This is Bay (aka Bay Laurel/Sweet Bay): Bay leaves were used in wreaths in Greek and Roman mythology. 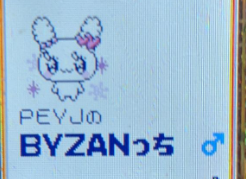 Byzan is an easy one - he hasn't really picked up any genes I'm after so he will be off to get married tonight if possible (that sounds kinda callous, right?!)

For my Meets, this time I am naming them after the names of colours.

This is Byzan (short for Byzantium):

Connection V3
I also got Tama mail today, my first V3! I got the blue camo one, it's not in quite as good condition as this but this is how it looks: 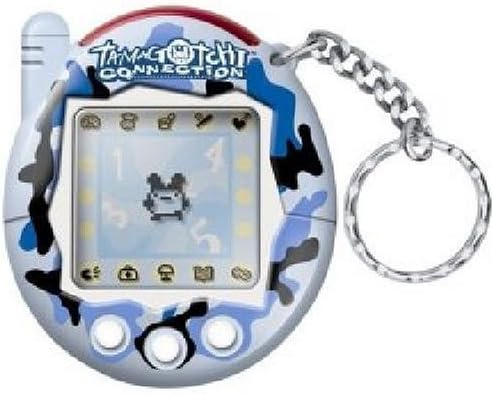 I haven't started it up yet but I'm very excited to because I've never played a V3 before!

I love the passion and dedication you put into your Log, it has very good content and is very detailed

anvotchi said:
I love the passion and dedication you put into your Log, it has very good content and is very detailed

Oh my gosh thankyou, that is really appreciated as I was wondering if I'm just rambling haha.

PIX (Gen 5) - Sebiretchi
Seb is 30 today! It was about this age I decided to move Ginjirotchi on, and I'm starting to get that feeling once again. As much as I like Seb, I think it's a good idea to try and experience ALL the Tamas before picking the one to keep. After a month, maybe the same daily cycle of adult care gets a bit old? Still love my Pix, though.

ON (Gen 4 - Reset) - Catnip and Caraway twins
I successfully kept the cat gene (yes!) but unfortunately ended up with the same Kuromi head/hat gene: 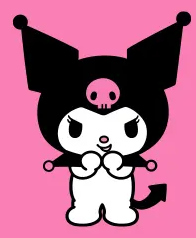 It's very cute but I definitely feel like I have gotten that gene a LOT. Anyway, here are the twins: 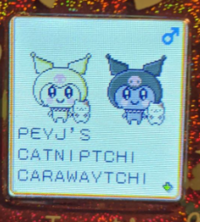 I chose Catnip as a name because I was definitely trying to keep the cat gene going. I also learned it has blue flowers, which I somehow didn't know before!

Caraway I chose because it sounded nice with Catnip, and it's interesting - it has licorice-flavoured seeds!! 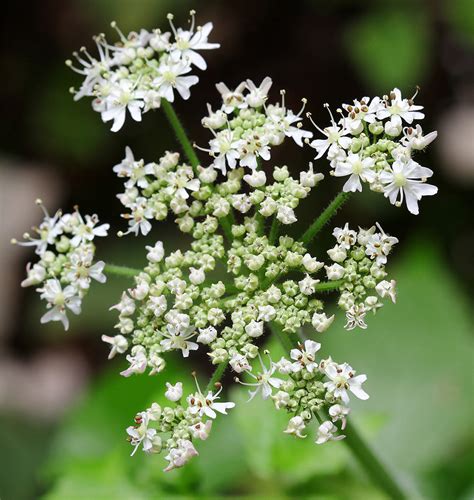 I didn't realise how similar the plants look, actually - that is pretty cool!

MEETS (Gen 4 - Reset) - Cadet
Okay, well, Cadet is adorable and I'm definitely going to be REALLY choosy about who I propose to: 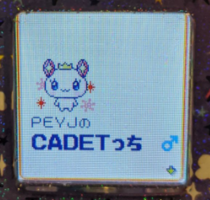 He is named after Cadet blue/grey -

Connection V3 (Gen 1) - Rec
I named Rec after Recruit, because my V3 is the camo/military one. As an Odd Generation, she has so far grown into a Teen Batabatchi (0-3 CMs).

I made a mistake and started this up when I was way too busy and so I've relied WAY too much on snacks to keep her happy. I'm a bit nervous to see the outcome of my overindulgent snack spree.

PIX [Gen 5] - Sebiretchi
Sebby is with the babysitter today as I have to work!

ON [Gen 4 - Reset] - Catnip and Caraway
These guys are 6 now. I must admit, I've been lurking on the app trying to find someone else with the cat genes to propose to, but no such luck yet. I did change their colour by eating the Rice Blocks.

MEETS [Gen 5 - Reset] - Desert
Cadet moved on and now I have Desert! I decided to try my hand at getting the octopus gene and it was a successful mission: 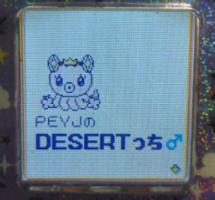 Desert is named after the colour Desert Sand, a classic early Cadillac colour!

I love your naming conventions ^^

I'm going to pause on updating my PIX log, because Sebi is in her 40s now so there's little to report. I might reroll soon.

ON [Gen 5 - Reset] - Dittany
I honestly spent a long week (at least) searching the app for an eligible Tama with the cat gene to marry. That whole time I only found two, and they both refused my proposals. (I don't understand why people refuse? You can simply accept and then not connect your Tama).

FINALLY, I found one! And I got rid of Kuromi head gene (which I was a bit fed up with). So, here is Dittany (still growing): 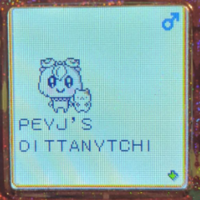 I am so happy that I kept the cat gene for a 3rd generation! Here is part of her family tree: 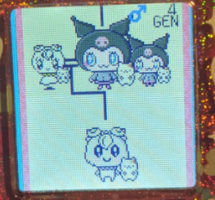 I'm a bit relieved, I was definitely not a huge fan of the twins' overall look. Just quietly, I think they looked a tiny bit creepy lol.

Dittany (of Crete) is a herb that was historically used for healing! 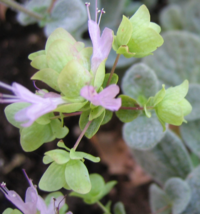 MEETS [Gen 6 - Reset] - Ecru
Desert was a cutie but I decided to roll the dice and continue on the cute octopus theme. It worked and I ended up with an octopus with a crown AND wings! Here she is: 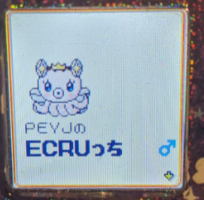 Isn't he a cutie? I'm considering doing a bit of an experiment with Ecru and accepting all proposals AND their eggs to anyone and everyone who proposes. I figure the app is closing down soon, and it might be fun to see who I end up with. What do you guys think?

Ecru is the "colour of unbleached linen":

From Wikipedia: Traditionally ecru was considered a shade of beige, but beginning in the 19th century it became more precisely defined as "a grayish yellow that is greener and paler than chamois or old ivory". Ecru comes from the French word écru, which means "unbleached".

K
Updates on my Tamagotchi Pix