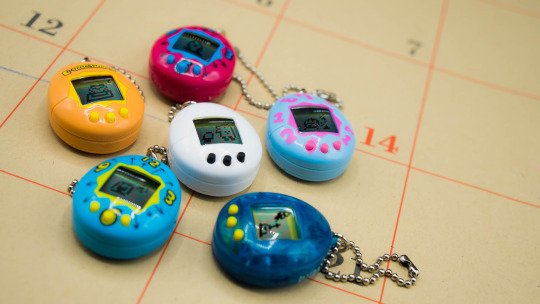 Placing their bets on nostalgia Bandai America is hoping that fans that nurtured the original virtual pet in 1997 will purchase the new 2017 Tamagotchi Mini decorated in the original 6 Japanese shell designs. The 2017 Mini is identical to the one just recently released in Japan, with the ability to raise 6 characters, however the packaging is a bit different. The 2017 Mini will feature unique packaging resembling the original packaging to pay tribute to the original version released in the United States. We can definitely see ourselves purchasing more than one for our collection! 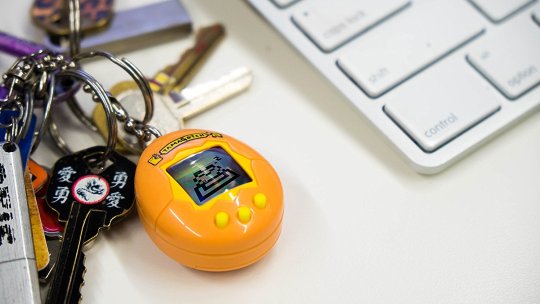 “For many Generation X kids, the Tamagotchi device can be considered America’s first and favorite digital pet,” says Tara Badie, marketing director for Bandai America. “The enduring power of Tamagotchi is its clear expression that nurturing and love never goes out of style. It’s such an honor to bring back one of the most beloved toys in a way that captures the magic and joy of a generation while embracing the sensibilities of new generations.”

The device is definitely being marketed for its nostalgia, hoping that fans back in the 90’s and perhaps even in the early 2000’s with the Connection devices will want to relive the good old days. This definitely seems like a good approach as many millennials have been flocking to nostalgic products that have been re-released. 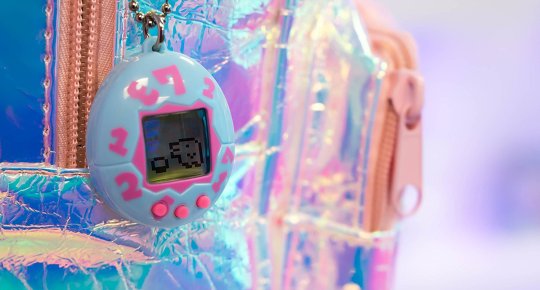 So what do you think about Bandai America releasing the 2017 Tamagotchi Mini in the United States for the 20th anniversary? Will you be ordering it? We want to hear from you!
Last edited by a moderator: Oct 25, 2017

I might get it, but I'm currently saving for something else...

If I come across it in a store, I'll definitely get it.

Oh man, sweet! I'll definitely be buying one in-store, actually I might get two or three just because it is such a rare opportunity to buy a Tamagotchi in-store! The programming might not be on par with other Tamagotchis, but it will be worth it, especially since I won't have to pay shipping costs

Thank you, thank you Tamaplace!

The 2017 Tamagotchi Mini was listed on the Toys “R” Us website hours ago, and already all 6 designs are now sold out! It appears that there is a strong demand for this re-released device, and we couldn’t be happier!

First off- how amazing is it to see Tamagotchi gracing the pages of the Toys “R” Us website again? We love it.

The devices are listed as “Bandai Tamagotchi Digital Pet Toy”, all 6 designs are up on their website and were available for pre-order. Already sold out, we will have to monitor these pre-orders just about everyday; don’t worry, we’ll keep you updated. 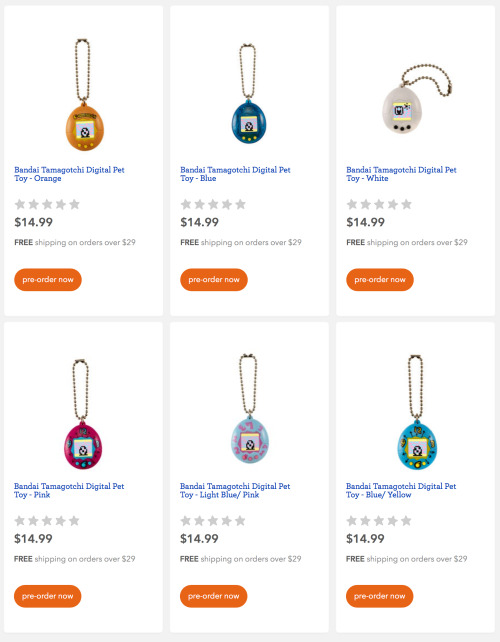 Pre-orders of the 2017 Tamagotchi Mini are limited to two per customer, and are priced at $14.99 These devices are estimated to start shipping on November 15th.

Be sure to head over to the Toys “R” Us website soon and hope more pre-orders become available! 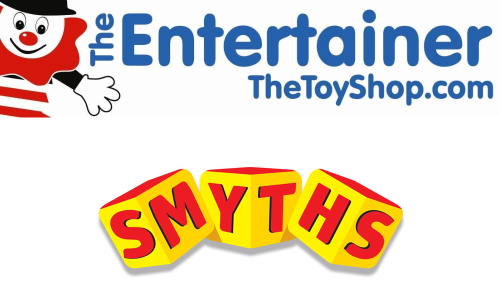 When Bandai America announced the release of the 2017 Tamagotchi Mini they made no mention of this release being outside of the United States, but this doesn’t look like the case. Although no official press release from Bandai UK, the 2017 Mini is launching across the pond! 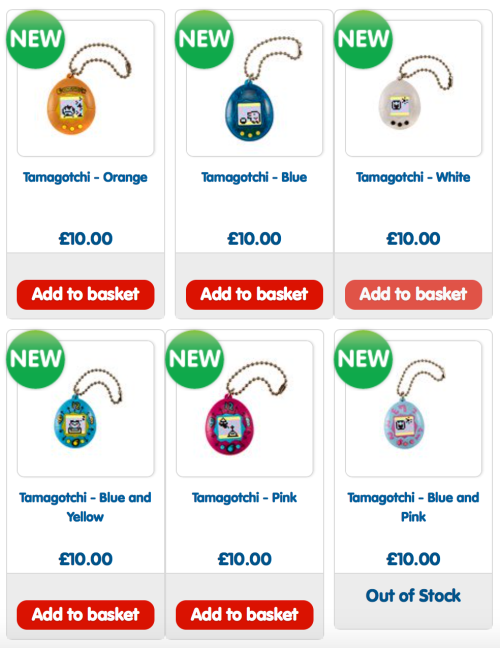 The Entertainer and Smyths Toy Store, two popular toy shops in the United Kingdom have the 2017 Tamagotchi Mini up on their website for purchase. Yes, thats right, purchase not pre-order. You can add the Mini to your basket for £10.00 or £9.99 and receive it within 3-5 business days! 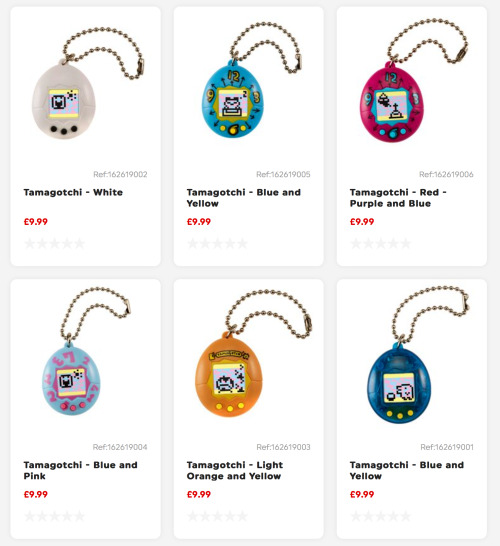 If you live in the UK then we suggest checking out The Entertainer &amp; Smyths Toy Storewebsites and starting your order today!

I've also checked that Toys "R" Us Canada is selling the rereleased Tamagotchi minis at $19.99 Canadian with a limit of 5 per customer. The preorders haven't sold out yet ;^) (P.s. Feel free to reuse the image if you want, Tamapalace.) 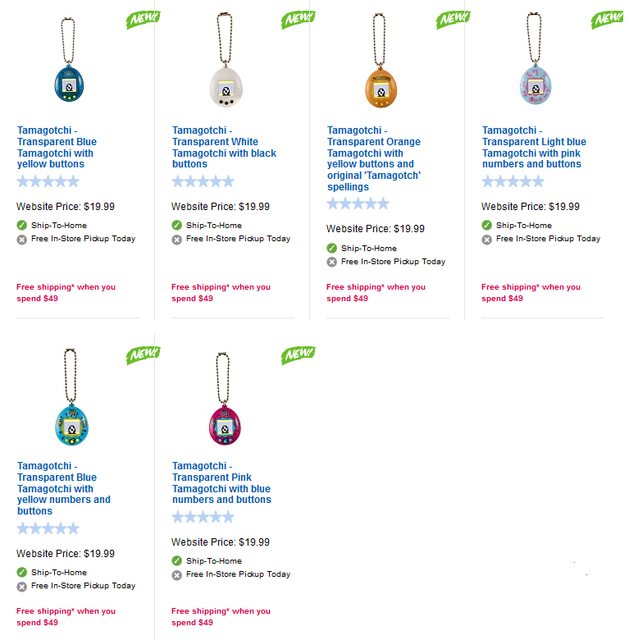 Sadly it isn't a color one but they're adorable! I couldn't resist, I made an order for two of them (by The Entertainer, because suddenly the light blue one was in stock again). The eMail says, it'll be delivered by the 24th October, so let's see ^_^ I'm curious and excited!

Thanks for the information about that new release!

I'm so excited for this, I'm definitely getting one. My nostalgia for tamas is running high esp. after this announcement, and I can't wait to add it to my keychain and have something to secretly occupy me at work lol.

I actually just got my tamagotchi the other day, it was really cool to once again be able to go into a store and purchase a tamagotchi again!

I done a little unboxing of it aswell on my youtube

The 2017 Tamagotchi Mini will be gracing the shelves of several retailers this fall (don’t worry we’ll have that list soon), but Amazon is getting some Tamagotchi love too!

If you haven’t gotten your pre-orders in this is a great time to do so, and don’t worry many more pre-orders will be available throughout several retailers! Stay tuned! 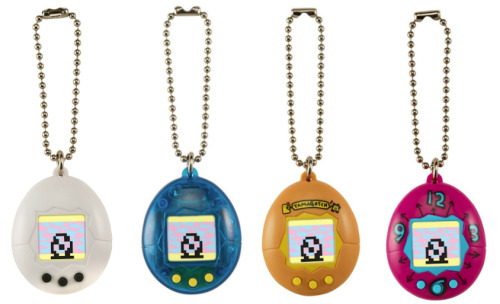 Ever since the official press release from Bandai America about the launch of the 2017 Mini we have gotten may inquires about availability. Where is the 2017 Mini available? Which stores, and most importantly which countries? Well have no feature, we have some information straight from Bandai about this.

Where will the 2017 Mini be available? The 2017 Tamagotchi Mini will be available in America in over 20 retail stores. Such stores include Target, Walmart, Toys “R” Us, and various other retailers. We will keep you updated as we receive a full list but these major retailers WILL be carrying the 2017 Mini starting on November 5th 2017.

Which countries will the 2017 Mini be available in? Good question. You’ll find this beauty in retail stores across several countries such as the United States, United Kingdom, France, Spain, Germany, Italy, Benelux and Australia.

Now retail store availability by country is not yet available but we can confirm that The Entertainer and Smyths Toy Store are carrying the 2017 Mini in their stores already! American Tamagotchi fans will have to wait until November 5th - no fair!

We can also confirm that Toys “R” Us in Canada will be carrying the 2017 Mini as well, among many other retailers.

This is the biggest Tamagotchi launch in quite a long time, perhaps since the TamaTown Tama-Go back in 2010. We are so excited to see the 2017 Mini in major retail stores across the United States and the widespread availability in many countries. Notably these are all the countries that also received the Tamagotchi Friends line. We want to hear what you think about the availability of the 2017 Mini in the comments below!

Whoa! I didn't think we'd be getting a global release. I guess this means Bandai is really keen on Tamagotchis now and I so hope that they'll get enough a response to make new Tamagotchi versions - or even perhaps bringing over colour tamas to other countries. Only time will really tell if we get another virtual pet boom

I'm quite tempted to buy one for the sake of collecting when they start appearing in stores here. I guess I'll see if I do in time

Oh man, I remember seeing this the other day for pre-order in Zing Pop! It said that it'd be here in November, which is pretty much accurate. I also remember hearing that you can pre-order it at EB Games, so I'm excited to see what happens!

You have no idea how happy it makes me to see Tamagotchis being released in the states again! ^_^

Hopefully I'll have enough money to buy one!

I've been looking EVERYWHERE locally for these lil guys! Unfortunately I haven't had any luck, wondering if Northern Ireland is included in the UK release or not Maybe we have to wait to November 5th like North America?

I just checked the Canadian Toys R Us website and the Tamagotchi mini preorders sold out! Now I really wonder if I'll actually be able to nab one in-store on the release date. I know my father is not very fond of driving to multiple places, but perhaps I might not need to ask that of him if I'm fortunate.

As you know the 2017 Mini is going to be released in several countries, with Canada being one of them. Although there isn’t a full list of retailers yet, Toys “R” Us Canada is now accepting pre-orders!

Pre-orders for the 2017 Mini will run you $19.99 CAD and are expected to start shipping out on November 5th 2017. We suggest that you pre-order ASAP because these have been selling out in several countries!

Bandai is showing Canada some love! Canadian Tamagotchi fans- how happy are you?

The 2017 Mini is selling out internationally! We already let you know that The Entertainer and Symths Toy Store’s are carrying the newest Tamagotchi. Most of those stores are sold out, and Toys “R” Us is no exception!

Shortly after listing the 2017 Mini on their website for £9.99, they have sold out! If you want to get your hands on this Gotchi then you’ve got to try your luck at one of their retail locations in the UK. Remember, the 2017 Mini is already available in several other countries, while North America has to wait until November 5th! 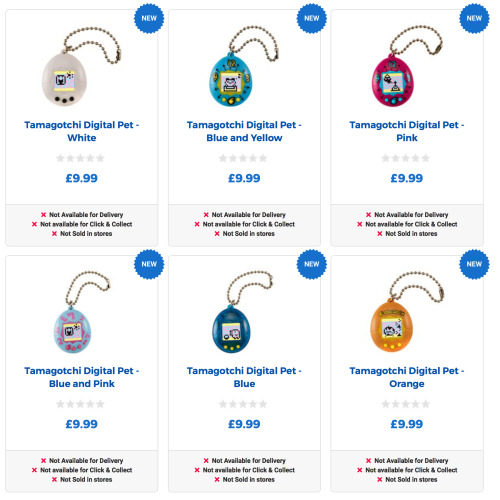 We just love the description Toys “R” Us UK has put together for the beloved 2017 Mini:

The original virtual reality pet is back! Tamagotchi is celebrating its 20th anniversary with this smaller version of the original Japanese digital toy that everyone loves. Featuring novel sounds, pixelated design and egg-shaped styling to take you back to the nineties this miniature handheld video game is easy to operate with a simple screen and three small buttons allowing you to see your small creature hatch from its egg and develop into an adult.
Feed it, clean up after it and take care of it to see your Tamagotchi pet grow through different stages of life. The more you feed and nurture the happier and healthier your pet will become. Watch out for the sick bug and give it your love and care to help your pet on its way to recovery. The ideal pocket-sized toy for both kids and adults alike this virtual pet is sure to be your new favourite companion and a great way to introduce the next generation to a classic childhood toy from the past.